Florida’s two Republicans in the U.S. Senate–Marco Rubio and Rick Scott–sent a letter to President Donald Trump this week, urging him to include $250 million for Everglades restoration efforts in his forthcoming Fiscal Year (FY) 2021 budget to Congress. This amount builds off their successful effort to secure $200 million in federal funds for FY 2020 South Florida Ecosystem Restoration (SFER).

Last year, Rubio, Scott, and Gov. Ron DeSantis urged Trump to include a sustained annual commitment of $200 million in construction funding for SFER in his administration’s future budget requests to Congress. After the president updated his budget request to Congress, Rubio and Scott secured $200 million for Everglades restoration in the FY 2020 appropriations bills that were signed into law on December 20, 2019.

As you finalize your Fiscal Year 2021 budget, we respectfully ask for your continued support to fully fund the critically important Everglades restoration efforts. Your administration’s leadership in securing a historic level of funding for Everglades restoration in last year’s budget has provided hope and a sense of pride that we will deliver concrete results. In anticipation of soon to be expanded construction, we request that your forthcoming budget request to Congress include a record $250 million for South Florida Ecosystem Restoration (SFER). While this amount is $50 million more than last year’s budget, it is reflective of your administration’s strong commitment to Florida’s unique ecosystems.

In recent years, harmful algal blooms have impacted both coasts of our state, devastating the economy and harming native wildlife that is not found anywhere else on earth. This issue has united Floridians and we are confident that we can persevere with your support. As evidenced by the state’s commitments over the past decade to provide record funding, Floridians, together with our federal partners, are focused on solving the environmental challenges we face.

Recent construction efforts, such as the Herbert Hoover Dike at Lake Okeechobee, were made possible by the federal and state cost-share agreement, which have put Everglades restoration efforts back on course. With continued robust funding, we anticipate several projects will be completed, making a very real impact in the lives of Floridians.

The importance of funding this world-class environmental infrastructure project to restore America’s Everglades cannot be understated. As such, a $250 million investment will not just benefit generations to come, it will build off your historic commitment to Everglades restoration that is already part of your lasting legacy in Florida.

Thank you for your attention to this important matter. We look forward to working with you to restore our nation’s Everglades. 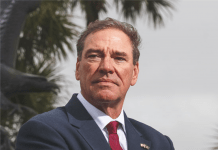 Jimmy Patronis: First Responders Across Florida Do Not Have Access to PPE During Coronavirus Pandemic