On Monday, U.S. Sen. Marco Rubio, R-Fla., spoke on the Senate floor ahead of the three-year anniversary of the school shooting at Marjory Stoneman Douglas High School in Parkland, Florida.

Rubio speech was as follows:

I recall vividly that day on February 14, 2018. It started like it does most days for people across the country, take your children to school, drop them off. In this case, some of them maybe drove themselves and within hours the lives of 17 families had been changed forever. It was a horrible tragedy. Seventeen students and faculty members who lost their lives and another 17 who were wounded in the attack. And it shocked the country. It was shocking because they went to do what so many people do on a regular basis in a place where you never think that something like that could happen.

And as my colleague pointed out, there is no resolution in the Senate or words that we can say that will restore the lives that were lost or erase the pain still felt by those victims, their families, their friends, those who loved them. But even as we continue to grieve, we must also work to prevent something like this from happening anywhere at any time.

I was proud that in the early days after this tragedy, within just a few weeks, together, working across the aisle, we passed the STOP School Violence Act, which provided federal grant money for school safety. And that has been ongoing now for three years. We passed the Fix NICs Act, which helped patch some of the holes that existed in our background check system.

Since that day, I’ve had the honor of getting to know and working with the parents of many of those who lost their lives at Marjory Stoneman Douglas High School. And I will say that their grace in the face of the most traumatic loss that any parent, any sibling, any cousin, any grandparent, anyone can imagine — working with them has been humbling in the face of the grace that they’ve shown. Their commitment to ensuring that no one else has to go through what they did is inspiring.

There are so many I can point to that have made a difference in their own way. They’ve all sort of focused on different aspects of what we should be doing. And I just want to take a moment today to recognize one individual, Max Schachter. I know many of you have gotten to know him here, and this man works tirelessly. He lost his son, Alex, on that day. But his commitment has actually produced significant progress. Thanks to his leadership — and I must say his leadership — I spoke to him again last Friday and he continues to work on these issues. And thanks to that, last year, the federal government created a federal clearinghouse on school safety best practices. A place that any district, any school can go to, something that’s constantly being updated, that puts, in a central location, the best practices and offers access to an array of resources for schools across our nation that are looking to protect their students.

And this is important because in the aftermath of this, everyone was trying to figure out, ‘Well, what should we do?’ And there was no central place where you could go to and find that out. And recently, as my colleague from Florida just pointed out, I, along with my colleague from Florida and Senator Ron Johnson, we reintroduced the Luke and Alex School Safety Act. Named partially after his son Max, which would make this clearinghouse permanent. It was put in place by the agency, but this would make it permanent.

And I just think of parents like Max, who have poured so much of their own lives into this work and continue to do so. And he’s always churning out new ideas. We spoke this last Friday about data that’s now available that a lot of people don’t even know is there, data that shows you which schools are having suspensions, which schools are having fights, which schools are having arrests and violence, as a way of finding anomalies in the data. He’s constantly, not just becoming a subject matter expert through this tragedy, but is constantly looking for improvements that can be not just done in Florida, but across the country, and he’s tireless all across the country.

There’s something else we took that was successful in Florida and that today we’ve reintroduced, along with Senator Reed and Senator King and my colleague from Florida. And that is reintroducing the Extreme Risk Protection Order and Violence Prevention Act to encourage the passing of these laws that allow you to identify someone who is a danger to themselves or others, go to a court, provide them due process, and potentially prevent a suicide or a senseless act like what we saw on that day three years ago.

And this bill would not mandate it, but it would dedicate Department of Justice funds to incentivize more states to adopt similar measures. It will encourage the rest of the country to follow the lead in Florida and to save lives. We know it’s prevented suicides, and we know it’s prevented potential attacks in Florida and in the states where it’s been implemented. We can’t force more states to do it, but we can try to incentivize it.

And so it’s my hope and my prayer that as we continue to work together, that we can achieve this and other things so that no family, so that no community, no state, no one will ever have to go through what the incredible families of Parkland endured on that day and in the three years that have followed. And so today, as we remember the lives that were lost, let us pledge to honor them by continuing to move forward towards safer and more secure schools and communities and our work here. 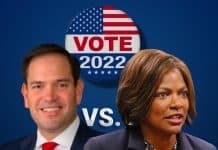