Rubio introduced the “Deterring Errant Behavior Risking International Space (DEBRIS) Act” and pointed to a recent incident as to why he thinks the bill is needed.

“On November 15, 2021, without any prior warning, Russia tested a dangerous, direct-ascent anti-satellite missile in low-Earth orbit. According to the U.S. Department of State, the test ‘generated over 1,500 pieces of trackable orbital debris and hundreds of thousands of pieces of smaller orbital debris that now threaten the interests of all nations,’” Rubio’s office noted.

“We must punish reckless space behavior,” Rubio said. “Russia and China should be held accountable for negligently creating space debris and endangering space assets critical to our national security. My bill would create consequences for this dangerous behavior and protect our astronauts and space infrastructure.”

According to Rubio’s office the bill “would establish a sanctions structure for foreign persons responsible for creating space debris without notification to the U.S. government, as well as require notification to Congress about persons sanctioned under this act” and “would include exceptions for instances in which the foreign entity has been acting within a civil space cooperation agreement with the United States or has been working in compliance with United Nations law enforcement objectives, as well as for the importation of goods. “

Rubio’s bill was sent to the U.S. Senate Foreign Relations Committee last week. So far, Rubio has not nailed down any co-sponsors and there is no companion measure over in the U.S. House. 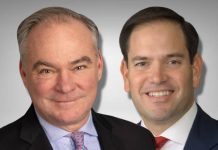