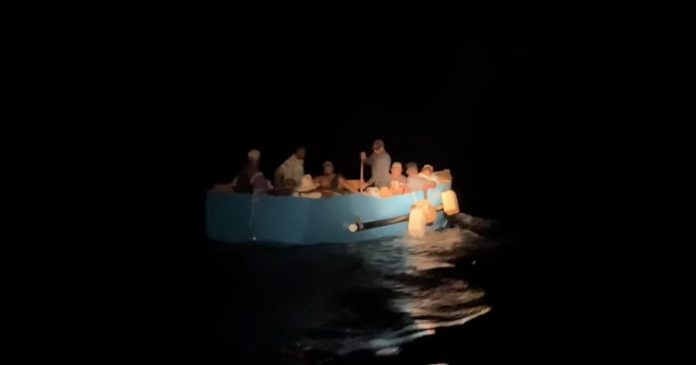 The letter ie below.

I write with great concern for communities in Florida whose resources have been overwhelmed by the ongoing influx of migrant landings, especially along the shores of the Florida Keys in Monroe County. Since December 30, 2022, more than 200 Haitians and 500 Cubans have made it to Florida’s shores. As a result of this surge, Dry Tortugas National Park was forced to close and a worsening humanitarian crisis continues to unfold – one that remains largely ignored by the Biden Administration.

This situation is the predictable result of this administration’s open border policies, where as a result, migrants risk their lives on makeshift boats. That message has been complimented by lax border security measures and weak enforcement of our immigration laws. In Cuba, the Biden Administration continues to gloss over the regime’s abuse of political prisoners, its denial of basic human rights, and its failure to conduct free and fair elections. These policies, among others, have undeniably contributed to the increase of migrants arriving in the United States.

The data paints a clear picture to this point. Under this administration, the number of Cuban migrants interdicted by the U.S. Coast Guard near South Florida has surged from only 49 in 2020, to 6,182 for the entire fiscal year of 2022 – a record that will soon be eclipsed by the more than 4,000 Cuban migrants that have already been interdicted in just the three months since October 1, 2022. Unsurprisingly, the number of Haitian migrants interdicted by the Coast Guard near South Florida has also skyrocketed from 418 in 2020, to more than 7,000 in 2022. These numbers demonstrate an unmistakable trend of a worsening crisis that necessitates federal resources be deployed urgently and adequately. If they are not, Florida’s communities and their limited resources will continue to bear the brunt of handling an unprecedented number of migrant landings and face the real consequences of failed immigration policies.

When migrants arrive, state governments, local communities, and other emergency personnel must spend valuable time, labor, and resources to provide medical care, personnel processing, and other critical space to look after hundreds of migrants that land unannounced and demand immediate attention. This diversion of resources hamstrings local and state efforts to assist Americans in need of help. That is not right. The federal government is responsible for enforcing our immigration laws. This administration can no longer afford to abdicate its role. With these concerns in mind, I request answers to the following questions:

1. What strategy does the administration have in place, if any, to address the surge of migrants overwhelming South Florida and the Florida Keys?

a. Do you anticipate the marked increase in migrants arriving to continue? If no, why?

2. Will you commit to providing more manpower and resources to the State of Florida to handle the increase in migrant landings?

3. Will you coordinate with state and local officials to reimburse resources that have been expended while caring for migrants in Florida?

4. Today, your administration announced new immigration protocols. In that announcement, please identify what specific measures, if any, that the administration believes will provide additional support to the overwhelmed communities in Florida and reduce similar maritime landings in the future.

Thank you for your attention to this serious matter. I look forward to your response.