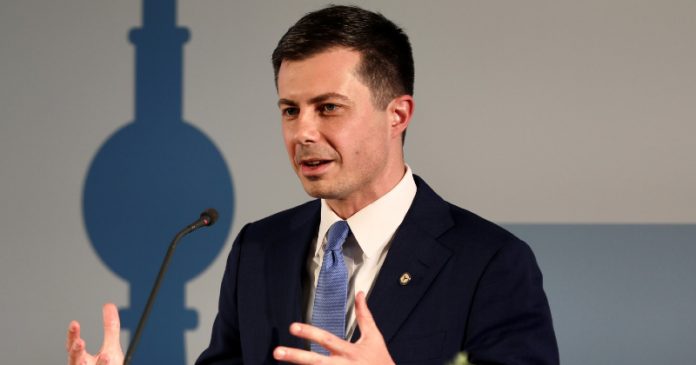 Rubio sent a letter to DOT Inspector General Eric Soskin requesting that he conduct a review to determine whether Buttigieg’s travels were in compliance with all applicable regulations, policies, and procedures.

I write to request that you conduct a review of Secretary Pete Buttigieg’s adherence to federal regulations and U.S. Department of Transportation (DOT) policies and procedures for travel. This request follows a troubling report by Fox News that Secretary Buttigieg has used taxpayer-funded private jets to travel across the United States, and internationally, at least 18 different times since taking office. While the total cost remains unknown, the same report notes that, in recent years, the Federal Aviation Administration (FAA) has charged federal agencies approximately $5,000 per hour to use aircraft in its fleet. If these reports are confirmed, it would represent yet another troubling example of this administration’s continued willingness to skirt basic ethics rules.

Pursuant to federal travel regulations, “[b]ecause the taxpayers should pay no more than necessary for your transportation, generally you may travel on Government aircraft only when a Government aircraft is the most cost-effective mode of travel.” The definition of “Government aircraft” includes chartered aircraft. DOT’s own Travel Order and Manual further states that “DOT employees are required to exercise the same care in incurring expenses that a prudent person would exercise if traveling on personal business when making official travel arrangements, and therefore, should consider the least expensive class of travel that meets the needs of the agency’s mission.” Given these requirements, it is unclear why Secretary Buttigieg would require such costly travel in these instances when more economical options were reportedly available.

Despite these regulations and policies, reports indicate that Secretary Buttigieg’s chartered flights have been used to travel around the United States and Canada. The Fox News report specifically highlighted trips to Florida, Oklahoma, Minnesota, Ohio, Nevada, and New Hampshire, which the article noted are frequently characterized as swing states. In response to the report, Secretary Buttigieg argued that Oklahoma is not a swing state, but such a distinction is irrelevant to a blatant abuse of taxpayer dollars.

I have long worked to ensure effective controls regarding leadership and staff travel and reducing the risk of fraud, waste, and abuse. Therefore, I ask that you conduct a review to determine whether Secretary Buttigieg’s travels were in compliance with all applicable regulations, policies, and procedures. I request that your review include a determination of the following:

1. On how many occasions to date did Secretary Buttigieg utilize government
aircraft and/or privately chartered aircraft?

a. How much did these trips cost federal taxpayers?

3. To what extent were all applicable federal travel regulations and agency travel policies and procedures appropriately followed for all of Secretary Buttigieg’s travels to date?

a. In each of the instances in which a chartered flight was used, were the appropriate travel authorizations, cost estimates, justifications, and approvals performed?

b. In each of the instances in which a chartered flight was used, what justification was provided for not flying commercially? Were these justifications approved according to Department policies and procedures?

d. For each of the chartered flights taken by Secretary Buttigieg to date, who were the other passengers on board each flight? Who was in charge of booking the flights? Were all policies and procedures, as required by the Federal Travel Regulation and the DOT Travel Manual, in addition to other relevant requirements, followed for each of the passengers onboard and by anyone involved with booking or planning the travel? Were the appropriate policies and procedures followed for any passengers who were not federal government employees?

e. In any instances in which regulations, policies, or procedures were not appropriately followed, what was the approximate cost incurred to the government as a result?

f. Is there a mechanism for Secretary Buttigieg to reimburse taxpayers for the costs incurred?

4. Did any DOT personnel raise concerns internally about Secretary Buttigieg’s repeated use of privately chartered flights? If so, how were such concerns addressed?

5. To what extent has DOT conducted oversight of executive travel, including Secretary Buttigieg’s travels by chartered flight? Have any violations been identified, and if so, what actions were taken in response?

American taxpayers deserve assurances that their tax dollars are not wasted by the government’s highest officials. I am committed to both holding Secretary Buttigieg accountable for any fraudulent use of government aircraft, and ensuring compliance with DOT policies and procedures. Therefore, I appreciate your prompt and thorough review of these issues.