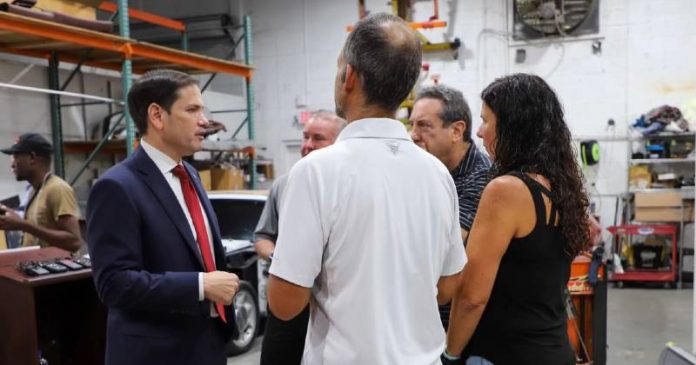 A few years ago, while visiting the National Hurricane Center, I asked the staff to describe a worst-case weather scenario for Florida. They described a high-category hurricane stalling off the coast and pummeling the western side of the state with storm surge. In other words, they described Hurricane Ian.

Over the course of that storm, Florida suffered as much as $50 billion in property damage. Whole communities were destroyed. Islands were cut off. And the death toll, now exceeding 100, continues to rise. It’s the worst natural disaster to hit Florida in almost a century.

Much of what has been lost can never be replaced. The loved ones killed by storm surge are never coming back. Family photos and houses filled with memories are gone forever. Similarly, though places like Sanibel Island will be rebuilt, they won’t be the same. You can’t resurrect a priceless slice of Old Florida.

And yet, Floridians will keep going. We will recover. Homes and businesses will be rebuilt, schools will reopen, and our state will emerge stronger than ever. We have done it before, and we will do it again. Florida is home, and folks aren’t going to leave it behind for anywhere else.

Given the scale and scope of the disaster––by some measures, the fifth-strongest hurricane ever to hit the United States––the federal government has an important role to play in facilitating Florida’s recovery. No matter how well-prepared a state or local government may be, efforts of this magnitude require federal assistance.

That starts with coordinating the immediate response. In this regard, cooperation between the Federal Emergency Management Agency (FEMA) and the state has already been tremendous. FEMA and agencies like the Small Business Administration (SBA) will continue to provide individual assistance to residents and small businesses affected by the storm.

But the federal government also has a role to play in supporting Florida’s rebuilding efforts through a disaster-spending package. After weeks spent on the ground, a meeting with President Joe Biden, and regular talks with Governor Ron DeSantis and local officials across the state, I can attest that such a plan is coming together. As a member of the Senate Committee on Appropriations, I am working with my colleagues in Congress to approve a $33 billion spending package laser-focused on helping Florida recover from this catastrophic storm. The approval and implantation of this assistance should not be politicized, delayed, or exploited.

The list of Florida’s needs is long and varied. Certain crops have been wiped out, and it will take about $2 billion to restore the farms and orchards that grew them. This is a high priority because food security is national security. Meanwhile, hundreds of millions of dollars are needed to ensure that Floridians have clean drinking water. Florida residents also require at least $5 billion through the Community Development Block Grant for Disaster Recovery. And we need at least $10 billion for construction projects conducted by the Army Corps of Engineers.

The Coast Guard must have resources to rebuild Station Fort Myers. National parks and other wildlife areas require repairs and clean-up. Bridges need to be rebuilt and restored, as do schools, hospitals, veterans’ facilities, and courthouses damaged by the storm. Ultimately, FEMA and the SBA will need more funds, too.

It’s a lot of money––and in truth, it is probably just the beginning. The damage done by Ian was extensive and crosses huge portions of the state. Though it will take time to calculate that damage and understand what is needed to rebuild, we can’t wait forever to appropriate the funds.

Florida will never be the same. But we are resilient people, and with help, we can and will regain our strength. Now it’s up to Congress to help make that happen. To my colleagues in the Senate and the House: Let’s get this done.

U.S. Sen. Marco Rubio, R-Fla., was first elected to the U.S. Senate in 2010. This article was originally published by RealClearFlorida and made available via RealClearWire.