Just asking the question will now get me labeled as a Pinochet fan. But consider the question within our current national circumstances. Caesar’s basic thesis was that the Roman Senate had become a criminal enterprise and that he was the last hope to break their grip before the republic fell into an oligarchy. It was the real-life version of “Is the Empire actually the ‘bad guy’ in the ‘Star Wars’ films?”

The point is not to be an apologist for Caeser, Pinochet or even Darth Vader but to understand better where we are as a country.

January 6th wasn’t an insurrection but rushing the Capitol certainly isn’t the sign of a healthy republic either. We all know that the 2020 election wasn’t kosher; the fact that the only “difficult” counting occurred in the cities within states where Joe Biden was most likely to benefit is absurd. This wasn’t because they were “big cities” either; the vote count didn’t break down in Boston or San Francisco. Of course, Florida had seen this script before, back in 2018. Unfortunately, knowing and proving are two different things. Al Capone was a notorious gangster, but he was only ever convicted of tax evasion.

Stolen elections are nothing new in America; just ask Andrew Jackson. However, what is new is the desperation of voters who have concluded that they have no other choice. When Nancy Pelosi lauds her palace as a “temple of American democracy,” she’s not appealing to the millions of Americans that will never even lay eyes on the tawdry opulence of the Capitol but lamenting an attack on the prized possession of her bipartisan kleptocratic regime. Like the French monarchy of the ancien régime, Beltway insiders are so far out of touch, they cannot even comprehend what is brewing right before their eyes.

Of course, voters have become desperate before; just ask the dead in the fields of Gettysburg. I doubt we will reach that same conclusion today; we are different people in many respects. But we have reached an absurd cultural flashpoint, where leftists believe that racism is inherited, but gender is not. That kind of assault on the basic assumptions of life is, not surprisingly, going to make folks very angry. The longer voters view Washington as the underwriters of this societal suicide, the likelier they will conclude that Caesar was right. Woe be it to all of us if we let the D.C. oligarchs push us over that cliff.

Chronologically, we didn’t make it to Richloam until well into the first year of the campaign. But of all the places we visited, the Richloam General Store may be one of the most quintessentially #2lanetravels places we visited.

Eric Burkes has faithfully restored his family store that was first built to serve this pre-WWII boomtown in the Hernando County woods of the Green Swamp. You will find an actual general store with food, dry goods, sundries and more. Ask about trains, turpentine and St. Petersburg while you’re there. Traveling east on State Road 50 from I-75, you’ll cross over US 301, then keep an eye out for Rickloam Claysink Road on your right. Follow the signs back about a mile down the country trail and you’ll find this true Florida gem.

Matt Caldwell served in the Florida House from 2010-2018 and is currently serving as the Lee County property appraiser. He covets your criticisms and your suggestions at matt@votecaldwell.org. 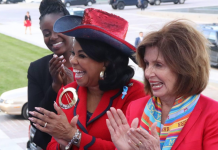