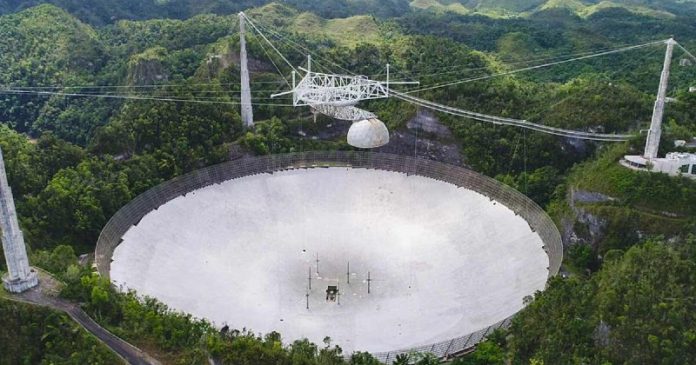 Last week, members of the Florida delegation called on the National Science Foundation (NSF) to change its plans on how to use the Arecibo Observatory (AO) in Barrio Esperanza, Arecibo, Puerto Rico.

AO was damaged at the end of 2020, including its telescope collapsing.

“Last month, the NSF proposed a plan to realign the facility as a STEM education and research center while excluding management and operations of other scientific instruments and assets, such as the 12-meter antenna and the LIDAR facility, currently available at the site,” noted U.S. Sen. Marco Rubio’s, R-Fla., office.

Rubio and U.S. Rep. Jenniffer González-Colón, R-PR, wrote Sethuraman Panchanathan, the director of the NSF, on the matter last week, calling for him to “update the plan to manage the AO to include management and operations of the scientific instruments currently at this site.”

“The AO has hosted programs for STEM education and research for decades. One of the fundamental necessities of the training and education programs offered at the AO is the ability to work alongside scientists who are on-site, get hands-on experience operating the instruments at the facility, and directly analyze new scientific data. Without active, multidisciplinary, world-class research present, there is no platform for truly robust STEM education at the AO,” they wrote.

At the end of last year, U.S. Sen. Richard Blumenthal, D-Conn., introduced a resolution “to recognize the significant scientific, educational and economic contributions made by the Arecibo Observatory telescope,” which had the support of Rubio and Scott. Other backers included U.S. Sens. Ed Markey, D-Mass., and Elizabeth Warren, D-Mass.

“The Arecibo telescope, completed in 1963, was the world’s largest single-aperture telescope for more than five decades, and collapsed one year ago this week,” Blumenthal’s office noted.

“The telescope at Puerto Rico’s Arecibo Observatory was a scientific marvel, extensively expanding our understanding of the universe,” said Blumenthal. “Its collapse left a significant educational void for our country and the scientific community across the world. I’m proud to recognize its important contributions alongside my colleagues and express our strong support for further studies for how best to replace—and build upon—this telescope’s capabilities at the world-class Arecibo Observatory.”

“For decades, the telescope at the Arecibo Observatory provided us with new atmospheric insights, solar system information, and heightened imagination for the future of scientific discovery,” said Markey. “While its collapse last year left gaping holes in our research, I am proud to join Senator Blumenthal to introduce this resolution to encourage the National Science Foundation to find the best pathway forward in replacing the iconic telescope. We can restore Puerto Rico’s scientific prowess, while also preserving the historic and cultural significance of the Arecibo Observatory.”

González-Colón championed the resolution in the House with Murphy, Soto and Waltz among its backers.

“Congress must continue recognizing the significant asset our nation had in this instrument, as we work with relevant federal agencies to move forward, and, most importantly, build on the capabilities we once had with the former telescope. We will not give up on the Observatory and will focus on what lies ahead for Arecibo. I look forward to keep working alongside my colleagues on this important issue,” said González-Colón who took to the House floor to speak on the matter.

“The collapse of the Arecibo telescope dealt a devastating blow to scientific discovery and planetary defense, to the people of Puerto Rico, and to the University of Central Florida in my district, which manages the site,” said Murphy. “The federal government must act in a swift and thoughtful way to replace the scientific and educational capabilities that were lost due to the collapse.”

Waltz, who leads Republicans on the U.S. House Research and Technology Subcommittee, visited the observatory over the summer and said it remains important to America’s efforts in holding off the Chinese challenge on astronomy and other sciences.

“The trip made clear to me that Arecibo is an important complement to this committee’s bipartisan tradition of promoting diversity in STEM, including the ‘MSI STEM Achievement Act’ that the chairwoman and I ushered through the House this Congress,” Waltz said. “The US should not rely on the capabilities of malign foreign actors like the Chinese Communist Party (CCP) to excel in radio astronomy. As such, I look forward to working with the NSF as they continue to examine the future of Arecibo.”