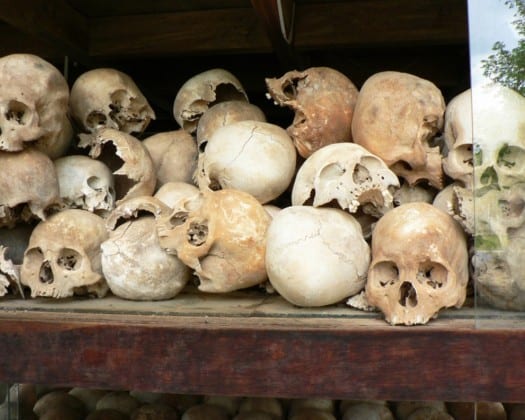 Forty-four years ago last week, Cambodia was taken over by the Khmer Rouge. From 1975 to 1979, in what is referred to as the Cambodian Genocide, a quarter of the country’s entire population was wiped out. There is some debate over the exact number: 1.6 million dead? 2.5 million?

In the 2000s, Cambodia held a national tribunal. Two prominent party members were convicted for crimes against humanity. But someone else should have been tried, too. And we, as a nation, cannot talk about the genocide without talking about the United States.

The fall of Phnom Penh may have been executed by Pol Pot, but it was designed by Henry Kissinger. In 1969, off of CIA intelligence, President Richard Nixon gave Kissinger – then the U.S. National Security Advisor – a carte blanche to target Vietnamese troops in Cambodia. Up to 500,000 people died in our air raids.

The Khmer Rouge took advantage of the destabilization and used our crimes as propaganda to recruit civilians. In the 80s, after their defeat, we would go on to fund their exiled soldiers.

Henry Kissinger, a man whose appetite for corpses is dwarfed only by his gluttony for division. In a just world, he would be tried as an accomplice in the Cambodian Genocide. But it isn’t just Cambodia. You will find him trailing blood in Chile, in Vietnam, in Bangladesh, in Argentina, in Laos, in Indonesia, in Israel, in Cyprus, in Cuba, in East Timor (a third of the population killed). In 2018, on North Korea, he demurred: “The temptation [of] … a pre-emptive strike is strong.”

When we talk about Kissinger, we must confront the fact that – while looming large – he is merely one cog in the American war machine. We must beware the other Kissingers. The ones whose names and faces are yet to stain our history books. The men and women waiting patiently for their turn to whisper “Death” in the ears of our leaders. Some of them are already there. And we, the people, have a duty to shout back “Peace.”

We may never see Henry Kissinger extradited to the Hague. So let us rebel by doing what he despises most. To band together. To unite, under one wish – his speedy extradition to Hell.