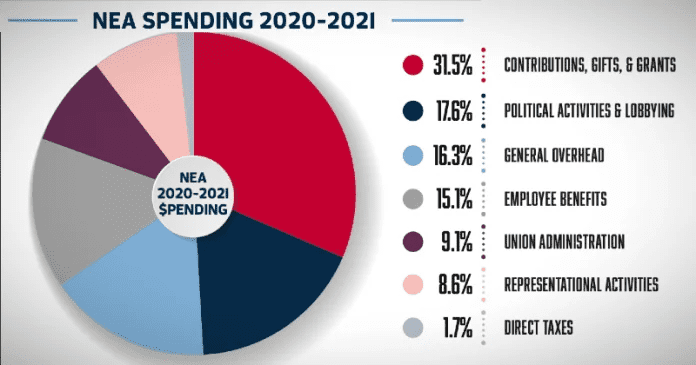 An analysis from Americans for Fair Treatment (AFFT) finds the largest teachers union in the country spent more money on liberal causes than on its own members.

From 2020-2021, most of the spending by the National Education Association (NEA) went to political activities and lobbying instead of its members.

AFFT found the NEA spent a total of $374 million during the 2020-2021 fiscal year with little money going directly to its members.

“The National Education Association’s (NEA) political and charitable spending in 2020-2021 makes the NEA look more like a political organization than a membership organization,” noted the AFFT.

The NEA gave $1.85 million to the Strategic Victory Fund super PAC which gives money to Democratic candidates. The group also sent $6.7 million to the State Engagement Fund, known to be a part of the Democracy Alliance network that donates to left-wing causes and candidates.

While union membership has been on the decline, the NEA continues to raise funds. AFFT noted that the union’s political spending increased over the prior year, from $51 million in 2020 to $66 million in 2021. The NEA collected $377 million in member dues with $200 members paying annually. That is $2 million more than the previous year.