“The president had made repeated calls for reinforcements over and over again,” Combee told Florida Daily. “Here is an open seat and I thought I’m just going to risk it all and answer the call, so that’s what I did. I thought I could be a greater help to the president and the ‘Make America Great’ agenda which I support as a member of Congress than I could as a state director at the USDA.”

“I’m going to do everything I can to support the president and his agenda,” Combee said. “I think he is trying to save the republic. It is that simple.”

The deep seated support for Trump came after a bruising primary where Combee supported U.S. Sen. Ted Cruz, R-Texas, for president. Combee says he got on board with Trump as soon as Cruz dropped out of the race and has not looked back. He’s certainly not willing to rip Trump over what happened in Helsinki.

“I think the reaction to that was really kind of a made up, manufactured thing,” Combee told Florida Daily. “If you watch what he is doing, more than what he is saying, it seemed to be pretty much universal agreement that he has been tougher on Russia than anybody has in recent memory so his actions speak for themselves.”

Combee spent five years in the state Legislature and told Florida Daily that he never expected to be the go to guy for Second Amendment issues. Having said that,  Combee is proud of his efforts to enhance the Stand Your Ground law. One way the law was reformed was to ensure you not have to shoot someone in order to assert a Stand Your ground defense.

“If you pulled a weapon on somebody to get them to back off, you could be charged with aggravated assault and face a 10 year mandatory sentence,” Combee said. “I said this is crazy. You have to shoot someone to assert this defense? This is not good. This could lead to people being shot that should not be shot where it could have been avoided. So we put that up and I successfully got it passed.”

Aggravated assault was later removed from the 10-20-Life statute. Combee spearheaded that effort after learning that you didn’t even have to touch someone to be charged with this felony and put in prison for a minimum mandatory sentence.

Combee hopes to change things in Washington as well and thinks entrenched Beltway politicians may not like him all that much.

“There’s a lot of people that have an interest in the status quo, and the reason for that is because it directly goes into their back pocket. It’s a tough fight, but I think he’s (President Trump) called on people to come help him, and I am willing to do that,” Combee said. “There’s a revolution, and I have heard it said that it is not a Trump revolution, he just happens to be the leader of it. He’s picking up on what people wanted to see and he’s taken the ball and moved it down the field.”

“I want to try to do something to the extent that one member out of 535 can do something to bend the cost of health-care, bend that curve down and create better access for people and that means competition,” he told Florida Daily. “Any place that we can create greater competition in the health-care industry, the better off we are going to be. It is going to create better access and it is going to lower cost.”

At home, he travels to the Everglades whenever he can and is frustrated with what is happening to what he called a crown jewel of the United States. The fix may be administrative, but if legislation is needed to combat the python, he is ready.

“The National Park Service has not been cooperative at all with the folks that are trying to remove the invasive predators in the Everglades,” Combee said. “They are wiping out every fur bearing species down there. Pythons and the Tegu lizards are all over the place. They cannot and will not, unless something has changed since I checked, you know they just won’t let folks go in there and try to remove those invasive species. You just can’t do that in a National Park. Well that’s absurd. That’s insane.” 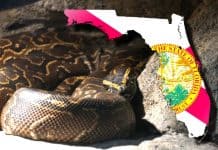