With Republicans in Tallahassee looking to ensure Florida will not have sanctuary cities, the only Democrat holding statewide office in the Sunshine State stressed her opposition to the idea.

State Agriculture Commissioner Nikki Fried released an email to supporters on Thursday and showcased her support for illegal immigrants.

“A new anti-immigrant bill is making its way through the Florida Legislature and aims to outlaw sanctuary cities in this state. While there are no sanctuary cities in Florida, SB 168 sends a harmful message to immigrants,” Fried wrote before taking aim at President Donald Trump.

“Immigrants are not a threat to this country’s safety or economy. That divisive rhetoric is spin pushed by the president,” Fried insisted. “SB 168 goes against every fundamental American value. It would create lasting damage to businesses and industries in this state and make law enforcement more difficult and demanding.

“Immigrants are an integral and necessary part of Florida’s past, present, and future. Twenty percent of Floridians are immigrants who pay $17 billion in federal and $6 billion in state taxes annually. Did you know that 54 percent of Florida’s immigrants work in farming, fishing, or forestry, making up nearly half of the workforce in those industries?” Fried continued. “I cannot sit by silently as injustice is being legalized. It is my job, as commissioner of  agriculture and an elected official, to defend the rights of those who keep our agriculture and economy thriving and everyone else who calls Florida home.” 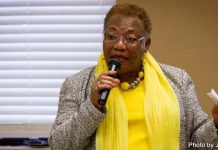