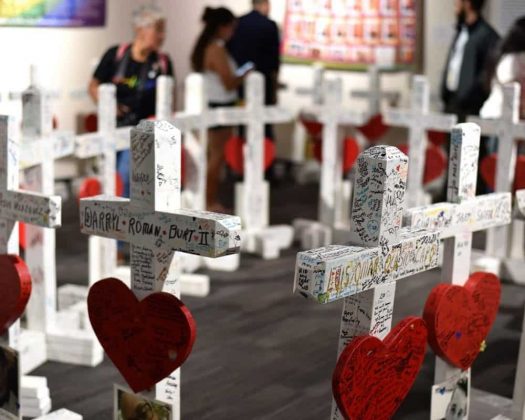 The Orange County Regional History Center has a new Pulse memorial exhibit, offering a new look at the tragedy two years after Omar Mateen, claiming allegiance to ISIS, opened fire at the crowded nightclub. The second floor now has more than 200 items on display that were left in or around Orlando after the Pulse terror attack.

Michael Perkins, the manager of the museum, says the tragedy is important piece of Orlando’s history

“What we are attempting to create, is a complete record of the event and the community’s response afterward,” Perkins said.

One wall shows many of the items that were left outside the night club and that other communities impacted by terrorism sent to the hospitals and downtown performing arts center. These include a “Boston Strong” t-shirt, a piece of the World Trade Center and several photos from a recent visit by survivors of the Parkland shooting.

“There’s a lot of information out there that we have collected just from the memorials that will really tell a full story,” Perkins said, adding that he is moved every time he moves through the exhibit but one section gets him every time.

“We have one area that just has the children’s responses,” he noted. “Children’s notes and messages, the stuffed animals that they left or asked their parents to bring down. The children’s messages and letters are what really impacted me when we were in the collecting phase and that’s still a tough room, a tough part of the exhibit to get through.”

As a permanent Pulse Memorial is being built at the former nightclub sight, Perkins says it is not the intention of Orange County and the History Center to compete for attention.

“In the future we are here to support other venues who may wish to tell the story,” he said. “We are a resource to the community and we will always be there to support anybody or any venue that is interested in doing something to recognize the community’s response to Pulse.”

Perkins is impressed with the work of his staff and the efforts to save as many of the thousands of items that were left by the public. He recalled how a group from Hawaii left almost 50 leis. Facing hot days and storm, those leis became bug infested.

“The cool part is this exhibit also showcases some of what we have been able to do to save these items,” Perkins said. Now in a case with a silicate to keep any water out, the leis should last for years.

While the display on the second floor of the Orange County Regional History Center has around 200 items, there are more than 5,000 items that the History Center saved. Of course, this does not include all of the pictures and the oral history of the terrorist attack which Pulse section of the Center’s website.

From June 10-June 16, admission will be waived at the Orange County Regional History Center so that anyone from the public can go to see how Pulse is being remembered two years after the terror attack that changed Orlando forever.