The Florida Department of Law Enforcement (FDLE) announced it has arrested Osceola County Commissioner Fred Hawkins and charged him with impersonating a law enforcement officer.

The arrest comes after a long-running feud between homeowners and the association management at Turnberry Reserve, a homeowner’s association in complete turmoil.

The incident that brought these charges happened back in November 2019 during a heated meeting of the Turnberry Reserve Homeowners Association. During that meeting, Ailyn DePena, a security guard, was preventing homeowners from entering the room where a vote was being held, so the sheriff’s office was called to settle the dispute. Hawkins arrived with that deputy and flashed a sheriff’s office badge, before pushing the security officer out of the way.

When the incident originally happened, DePena was arrested and charged with battery and resisting arrest for blocking Hawkins’ path. Later, all of the charges against Depena were dropped and she has since filed suit against the sheriff’s office for that arrest.

According to the arrest affidavit for Hawkins, the charges stem from much more than flashing a badge. According to the affidavit, Hawkins tried to enter the room, saying “I am a sheriff. I am with the sheriff’s office. You are about to get arrested” while speaking to the security guard.

Hawkins was in possession of a legitimate badge, albeit an honorary one. He was given that badge by the sheriff but has never received law enforcement training. The badge given to him does not convey arrest powers.

The incident that got Hawkins arrested is just another in a string of contentious moments between Turnberry Reserve and its homeowners.

The manager of the property, Sherry Raposo, was arrested for fraud after her actions running the homeowners association. Raposo’s boyfriend, Joseph Conover was also arrested for posing as a law enforcement officer when he was the head of security at the complex. Conover was convicted in North Carolina of felony charges and stripped of his law enforcement credentials for false arrest and abuse of power, only to resurface in Florida as a security officer at Turnberry Reserve. The criminal cases against both Conover and Raposo are scheduled back in court at the end of July. Both have pled not guilty.

As for Hawkins, he was released on a $1,000 bond and now waits to see if and when Gov. Ron DeSantis will suspend him. An email to the governor’s office about the case was not answered.

Hawkins is currently running for a state House seat being vacated by state Rep. Mike LaRosa, R-St. Cloud, representing parts of Osceola and Polk Counties. Hawkins was wearing a campaign shirt at the event in question and his campaign offered its take on the incident.

“Commissioner Fred Hawkins did not impersonate an officer, as is charged and what will be proven is that he is innocent of the allegation,” the Hawkins campaign said in a statement. “Through due process, what will be proven is the commissioner was merely trying to gain access inside a meeting room where an HOA meeting was growing contentious and citizens getting unruly. Hawkins was attempting to reach a deputy in hopes of deescalating the situation when he was blocked by a private security guard who was already warned not to block the door. As an aside, Hawkins had requested that charges not be filed against the private security guard who was arrested for battery against him. Commissioner Hawkins has routinely cooperated with investigators in an open and honest fashion and will continue to do so in this next phase.

“A few days prior to the November 7, 2019 Turnberry Reserve Homeowners Association (HOA) meeting, several postings on social media led many to believe, which later proved to be accurate, a contentious and heated gathering was to be expected related to electing a new HOA board. Commissioner Fred Hawkins reached out to the Osceola County Sheriff’s office two days prior to the planned meeting, asking for the office to provide deputies for security purposes. It is important to note that Commissioner Hawkins was appointed a Special Deputy on February 19, 2019 through the Osceola County Sheriff’s Office and was there ready to assist,” the campaign continued.

“What had been previously reported, and may be viewed from several online videos, one can plainly see the HOA meeting was quickly escalating and an angry and frustrated crowd of homeowners began to demand access to the room for fear the board would restrict their access to vote. Reasons for the warranted frustration included commands by the hired security guard blocking the front door of the voting location that there was to be an unachievable time-certain for all votes to be cast, no videos or photos allowed within the room, and the inability to view the HOA ballot prior to voting,” the campaign insisted. “This is nothing more than an orchestrated witch hunt to take out the Republican frontrunner in a hotly contested election year.”

You can view the arrest report here: 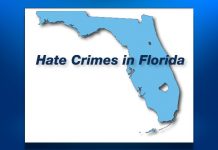