People for the Ethical Treatment of Animals (PETA) wants to stop the use of animal references when putting down other people.

In a recent Tweet, PETA called for the elimination of the use of animal names to insult others.

“Calling someone an animal as an insult reinforces the myth that humans are superior to other animals and justified in violating them. Stand up for justice by rejecting supremacist language,” PETA noted.

Instead of using animal names to describe criticism of how humans behave, PETA has issued substitutes to use instead of animal references.

For example, instead of calling someone a “chicken,” call them a “coward.”

If a person you know is a tattle-tale or a “rat,”, PETA calls for the use of the word “snitch” instead. PETA also hopes that “snake” will be replaced with “jerk.” Instead of describing somebody as a “pig,” refer to them as “repulsive.” And don’t call them a “sloth,” call them “lazy” instead.

But PETA’s calls sparked criticism of and jokes about the group.

“You must be forgetting the time you compared fat women to whales,” said Elman.

Elman shared an image of a past PETA billboard that wanted people to “save the whales, lose the blubber, go vegetarian.”

TV personality Piers Morgan slammed PETA by stating the group’s name was “offensive to pets because it reinforces the myth that all pets are ludicrously woke imbeciles.”

Other critics insisted PETA is not helping the animal rights movement and is focusing on the wrong issue. Other critics, made fun of PETA, insisting that animals have “no concept of words: and accusing the group of using language meant for human rights.

“Animals aren’t oppressed by those words because they don’t understand our language. And have no concept of words and their meaning,” insisted one critic of PETA on Twitter. 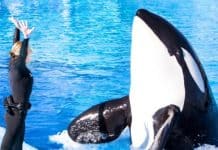