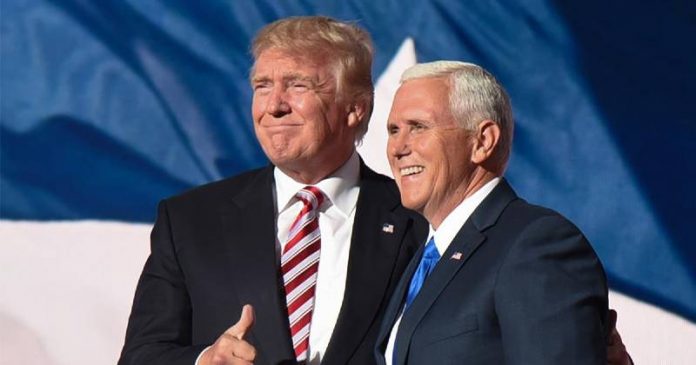 Mike Pence first heard all the lewd details of the now infamous Access Hollywood tape – the October surprise that almost sunk the 2016 Republican presidential ticket – on his campaign bus while “huddled in the privacy of the motor coach’s bathroom.” The call came from Donald Trump.

Trump was on the phone to apologize for embarrassing his running mate, then the governor of Indiana and a prominent champion of the kind of social conservatives who generally frown at what the Trump campaign later tried to dismiss as “locker room talk.”

Major Republicans were withdrawing their support. The campaign was floundering. According to Pence, Trump “specifically asked me to tell Karen he was sorry.” He said he’d have to call him back. “But it was my wife’s deep faith and belief in forgiveness that guided our response,” Pence writes. And after the apology, he adds that it was Karen Pence who “reminded me that grace is the centerpiece of our faith.”

It’s also a centerpiece of the former vice president’s forthcoming book, “So Help Me God.” For four years, Pence was nothing but loyal to Trump. He broke with Trump only on matters of conscience, condemning the Access Hollywood remarks and later foiling the scheme to throw out the 2020 presidential election.

In the memoir obtained early by RealClearPolitics, Pence details and codifies that divorce, even as more and more conservatives consider their own split with the former president after Republicans – including numerous Trump-backed candidates – dramatically underperformed in the midterms.

The book will be published Tuesday. Trump, who has all but officially declared a third bid for the presidency, said he will make “a very big announcement” Wednesday. The distance that has emerged between the two men would have been unimaginable just a few short years ago.

Once when asked about his faith during the pandemic, Pence turned a question about prayer into an answer about his gratitude for his boss, telling RCP in August of 2020, “I really could not be more proud of this president’s leadership through this pandemic.” This was not surprising.

Critics on the left saw in the loyal vice president a complicit enabler; on the right, the conscience of a populist administration who helped get tax cuts into law and shepherd three conservative justices to seats on the Supreme Court. By most accounts, Pence never sought to steal the spotlight from Trump in public or to disparage him in private for his own gain.

Despite their current differences, Pence describes his goal in the administration as trying to be a team player. When the White House put together a COVID task force, for instance, and Trump asked him to lead it, the Indiana Republican writes “as I had done so many times over the last three years, I looked the president in the eye, nodded, and said ‘I’m here to serve.’”

He is complimentary of their shared work and often charitable, even when describing some of Trump’s worst blunders. After Anthony Fauci described how the coronavirus weakens when exposed to sunlight, Trump floated the idea of killing infection inside the body of patients with “very powerful light” or “by injection.” Pence writes that no, “the president was not telling people to ingest bleach.”

“The reality was the president made an unforced error and his political opponents, including those in the media,” he argues, “never let it go.”

Pence cuts through past controversies to highlight what he sees as real accomplishments, recalling, for instance, how “in nine short months we developed three safe and effective vaccines,” and how by the time the administration ended, “we were vaccinating a million Americans a day.” It was “the greatest national mobilization since World War II,” a feat possible, he writes, “only in America.”

While he did not contradict Trump publicly, Pence details moment where he took threats to the country much more seriously than did the previous president.

“I always had the impression that the president felt that acknowledging Russian meddling would somehow cheapen our victory,” he writes of Russian efforts to sway the 2016 election, before qualifying that foreign “mischief had not elected Trump president.” He still took it seriously, calling it “an affront to our democracy” that “we were not going to allow.”

When Russian President Vladimir Putin tapped him on the shoulder at the Association of Southeast Asian Nations in Singapore, Pence noticed an unwarranted familiarity “as if we were old acquaintances.” He also noticed photographers capturing the moment. “Mr. President,” Pence recalls telling Putin, “we know what happened in 2016, and it can’t happen again.” When Putin protested through a translator, Pence repeated his warning word-for-word.

Pence writes that he purposefully kept his expression firm and fixed throughout the exchange as “I looked down on him.” Trump later complained that he looked “too harsh.” The vice president concludes of the diplomatic moment, “I liked the photograph.”

Elsewhere throughout the book, which chronicles everything from his time in college to his congressional career, Pence lightly critiques Trump. Occasionally, he leaves little to the imagination: He describes the conversation between the former president and his Ukrainian counterpart as “a-less-than-perfect call, but it was not an impeachable offense.”

The vice president did not air any grievances at the time, and he dismisses the impeachment fervor that had swept over congressional Democrats as “absurd.”

Unlike other Trump World tell-alls, the Pence book is light on palace intrigue. He does write critically of how former White House chief of staff Mark Meadows flung “the doors to the Oval Office wide open” to characters who had no business being there. He also relates the moment he knew Steve Bannon “would not be a long-term player in the administration” – when the strategist landed on the cover of Time magazine to the chagrin of Trump. He speaks admirably of Gen. John Kelly, who replaced Reince Priebus as chief: “He quickly brought order and routine to the White House … we needed it.”

The book reflects the servant-leader brand that Pence has cultivated throughout his career, even in the face of an executive who placed a higher premium on winning by any means. And even when splitting with Trump, he details how he looked out for Trump and the nation’s best interest.

Shortly after the 2020 election, when the likes of Rudy Giuliani and Sidney Powell had the president’s ear, Pence urged Trump to “simply accept the results of the elections, move forward with the transition, and start a political comeback,” by focusing first on the Georgia runoffs and later on helping the GOP win the midterms. “I don’t know, 2024 is so far off,” Trump sighed. Then, according to Pence, he returned to the topic of election challenges.

The subsequent effort to overturn those results would see the political relationship between the two men become irreparably damaged. Pence concluded, after studying the issue, that he did not have the constitutional authority to decertify the presidential election. As the New York Times first reported, Trump rebuffed his most loyal ally, telling him that “you’re too honest” and warning him that “hundreds of thousands are gonna hate your guts.”

Those threats did not sway Pence, and the book offers dramatic new details about how the vice president and his family refused to be evacuated from the U.S. Capitol on Jan. 6. Rioters chanted “Hang Mike Pence.” Secret Service tried to whisk him away in the motorcade. He refused.

“I pointed my finger at his chest,” Pence recalls telling the head of his security detail. “‘You’re not hearing me, Tim. I’m not leaving! I’m not giving those people the sight of a 16-car motorcade speeding away from the Capitol.’”

The next morning, House Speaker Nancy Pelosi and Senate Majority Leader Chuck Schumer phoned Pence to recruit his help in invoking the 25th Amendment. He didn’t take the call. An avowed originalist, who had just refused to go along with Trump’s extra-legal theories about the election, he writes that to do so would’ve required “a gross distortion of a provision in the Constitution.”

Pence writes that he supported legitimate challenges to the 2020 vote count. He concluded, however, that the Constitution didn’t grant him the authority that Trump had imagined. Always loyal, in the days that followed, Pence could not hide his fury when the president asked if he was “scared.”

“No,” Pence writes that he told Trump less than a week after the attack, “I was angry. You and I had our differences that day, Mr. President, and seeing those people tearing up the Capitol infuriated me.”

Fury was tempered with grace during a final conversation on Jan. 14, the day after the president’s second impeachment. Pence told Trump he was praying for him.

“Don’t bother,” Trump replied. Pence writes that he paused halfway to the door of the Oval Office: “I paused, looked the president in the eye, and said, ‘I guess we will just have to disagree on two things.'” When Trump asked what, Pence answered that the first difference was about the election results. The second: “I’m also never gonna stop praying for you.”

The two would speak “from time to time” after leaving the White House, Pence reveals in an epilogue that ends his chapter on the Trump Era, an afterword that the GOP could repurpose should they pursue a new champion. “When the president returned to the rhetoric he was using before that tragic day and began to publicly criticize those of us who defended the Constitution,” he writes, “I decided it would be best to go our separate ways.”