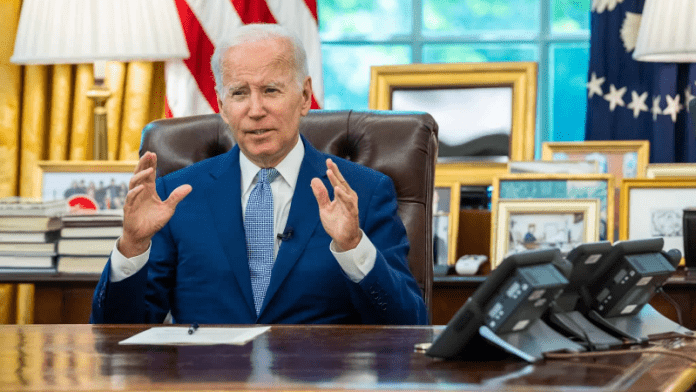 Joe Biden walked into the State Dining Room at the White House like a man crashing his own funeral, and not for the first time. By now, the president must enjoy the routine.

Less than 24 hours earlier, pollsters, pundits, and even politicians from within his own party had openly warned that voters would soon punish the White House for a jittery economy and historic inflation, effectively crippling the president. But the crushing rebuke never came, or at least not to the degree Democrats feared and Republicans had hoped for in the 2022 midterm elections.

Biden made the most of the moment.

The “incessant optimism” of his that some found out of touch or even grating? It was warranted: “I felt good during the whole process.”

The president may have overstated his case. Control of Congress was still too close to call Wednesday evening, and just days earlier he was preparing Democratic donors for “a horrible two years” where all he’d have to stave off Republican majorities was “a veto pen.”

But Biden brushed past those previously expressed concerns. He had just outperformed former President Barack Obama’s midterm record, watched his party significantly limit their losses, and defy nearly a century’s worth of history. Ever since Franklin Roosevelt, the party that occupies the Oval Office has averaged losses of 28 House seats and four Senate seats. Republicans may still win both chambers of Congress, but their worst-case scenario in the Senate is a razon-thin margin – and in the House, they may be in single digits.

Biden was eager to run through the score in light of that historic context.

“While any seat lost is painful [and] some good Democrats didn’t win there last night, Democrats had a strong night,” he said. “We lost fewer seats in the House of Representatives than in any Democratic president’s first midterm election in the last 40 years, and we had the best midterm for governors since 1986.”

When other presidents have experienced bad midterms (Obama called his party’s huge 2010 losses a “shellacking” while George W. Bush admitted Republicans had gotten a “thumping” in 2006), they usually express a willingness to moderate. After the Democrats’ 1994 comeuppance Bill Clinton volunteered that “the era of Big Government is over.” It wasn’t, but the way Biden framed it Wednesday, there was no rebuke, and therefore no reason to even give lip service to changing course.

When asked explicitly what he planned to do differently during the next two years of his term, the president replied, “Nothing.” And while he acknowledged that Americans were frustrated, Biden chalked that frustration up to ignorance. “They’re just finding out what we’re doing,” he said of the electorate. “The more they know about what we’re doing, the more support there is.”

He stands ready “to compromise with Republicans where it makes sense on many other issues.” He made clear, however, that did not include reworking “historic commitments we just made to take on the climate crisis,” tax cuts for corporations or the wealthy, and “fundamental changes” to entitlements. Otherwise, the president insisted that he and Minority Leader Kevin McCarthy, who is expected to become speaker, “could work out a modus vivendi.”

Governing together may prove harder than expected for the White House and Republicans, regardless of whether they take one or both chambers of Congress. A looming fight over the debt ceiling is approaching, which the GOP has publicly expressed interest in using to force spending cuts. But Biden was more eager to focus on the fate that he just avoided.

He insisted that while “a lot of people are hurting” from the pandemic and inflation, voters agreed with his closing message about threats to democracy and access to abortion. In particular, the president thanked younger voters, who “voted historic numbers again, just as they did two years ago.”

Younger voters had buoyed him during his 2020 presidential run, a contest in which prognosticators had declared his political career over and done with more than once. “He got fourth in Iowa then fifth in New Hampshire,” an alumni of the Biden campaign told RealClearPolitics, recalling the 2020 Democratic primary. “The man’s been knocked down a few times.”

Throughout that contest, as the New York Times noted at the time, Biden was “perennially left-for-dead.” Just as Democrats had looked past him to Hillary Clinton in 2016, at times in 2020, his party seemed poised to nominate a newer name like then-South Bend Mayor Pete Buttigieg or a progressive like Vermont Sen. Bernie Sanders. But after Biden won in South Carolina, prognosticators had to delay the autopsy.

Similar doubts were aired during the general election until he defeated former President Donald Trump, Biden and his loyalists remind the skeptics. Even this year, there was a time when Biden’s “Build Back Better” agenda was dead on arrival in the Senate. Together, the president and Sen. Joe Manchin scooped out the legislative guts of that bill, renamed it the Inflation Reduction Act, and passed it into law.

The fact that the president had not only survived but seemed to avoid a midterm rout altogether, well, that fit a broader theme in the collective mind of Biden World. It was reminiscent of the moment when the president lectured the New York Times editorial board in December of 2019 for counting him out during the presidential primary.

“You all declare me dead,” he said before making sure to clarify that he was speaking generally and not specifically about the New York Times. “And guess what? I ain’t dead, and I’m not gonna die.” The Times endorsed Sens. Amy Klobuchar of Minnesota and Elizabeth Warren of Massachusetts anyway. Six months later, Biden clinched the nomination.

That clip has resurfaced and made its way through the West Wing after Election Day as Biden enjoys a breath of new life after the midterms. The regular declarations of death, or near death, have inspired a new mantra in the administration. “Never underestimate,” wrote Ron Klain, the White House chief of staff, “how much Team Biden is underestimated.”