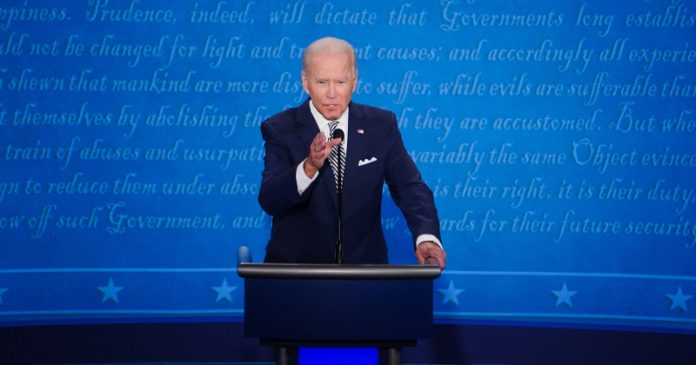 President Biden will travel to Rehoboth, Delaware, this weekend – not Arizona or Ohio or Nevada or anywhere else where his party desperately battles on behalf of candidates critical to maintaining Democratic control of the U.S. Senate.

Republicans couldn’t be happier to point out the obvious: A president whose job approval rating is under water is not in high demand in the stretch run of the midterm elections.

“Joe Biden’s unpopularity follows him wherever he goes,” Ronna McDaniel, the chairwoman of the Republican National Committee, told RealClearPolitics, “and Democrats know their unwavering loyalty to Biden is their biggest liability.”

White House strategists read the same public opinion polling Republicans do. According to the RealClearPolitics Average, for instance, more Americans disapprove of the president’s job handling, 53.7 percent, than approve, 43.3 percent. The fear among Democrats is that a party leader with those numbers may do more harm than good if he hits the campaign trail on behalf of a candidate struggling to pick up or maintain a seat in Congress.

By contrast, Republicans would love to see more of him. One senior GOP strategist practically invited the president to rally on behalf of his vulnerable colleagues, offering to lay out “a welcome mat, an open sign, or even a red carpet: whatever it takes to get Joe Biden on the road for down ballot Democrats.” This isn’t likely to happen, the strategist joked, because Biden “is as a toxic as your last relationship.”

Biden’s predecessors faced the same problem. But Barack Obama and Donald Trump didn’t retreat to the same degree. They were out and about before the midterms. As Bloomberg News recently noted, that strategy did little to help. Democrats still lost the House in 2010 in a result Obama himself described as a “shellacking.” Trump’s GOP fared even worse, losing both the House and Senate in 2018.

When pressed about what the president’s political schedule would look like in the closing weeks before the midterms, given that Biden hasn’t attended many rallies or done much of the traditional political fare, White House officials have acted as though a president’s coattails – or lack thereof – is somehow a strange new political topic. White House press secretary Karine Jean-Pierre told one reporter inquiring about Biden’s schedule that it was “a bizarre question.”

According to Jean-Pierre, Biden has “been very visible,” not just last week but also this weekend. For evidence, she pointed to recent stops in Colorado, Oregon, and California: all safely blue states that Biden carried by double digits. Also, the president has been incredibly active, appearing at party fundraisers and working the phones to bring in the donations that are the life blood of every campaign.

And there are more trips on the schedule. Biden will travel to Pennsylvania next week, where Lt. Gov. John Fetterman leads Mehmet Oz by a slim margin, and then Florida in November, where Charlie Crist trails Gov. Ron DeSantis.

On Friday, the president was apparently needed in Portland. He brought glazed donuts to volunteers making calls on behalf of Democrats there and rallied them to their work, declaring the coming midterms the most important off-year elections since the days of Franklin Roosevelt.

The fact that he was among friends on the liberal Pacific Coast wasn’t lost on the president. It was nice, Biden said, to be in a state he won “by 16 points.” A political animal all his life, the president knows how elections work and doesn’t appear to take things too personally. Back in August, he quipped that he’d stump for Sen. Chris Van Hollen, either “for him or against him, whichever will help the most.”

It would still mean a trip to a Democratic Party stronghold, travel that Republicans argue only underscores the unpopularity of the president.

“Biden’s travel to deep-blue states instead of hitting the road for vulnerable Democrats is testament to the lack of enthusiasm among Democrats,” McDaniel told RCP before plugging the Republicans who “are traveling the country and taking our message to all voters because everyone is suffering from Biden and Democrats’ failures.”

Biden’s travels to Delaware are a feature of his presidency by now, even during campaign season. A recent analysis by CNN found that he has spent a fourth of his presidency in his home state, either at his home in Wilmington or his beach property in Rehoboth.

Democrats are widely expected to lose the House, and the Senate is seen as up for grabs as economic anxieties weigh heavily on the minds of voters. This on top of the fact that traditionally a new president’s party suffers midterm losses as the electorate inevitably loses some of its enthusiasm for a new leader. Plenty of presidents before Biden have had to contend with the reality that they may be more of a liability than an asset for their party, and for now, Republicans are happy to highlight the latter.