Polk County Supervisor of Elections Lori Edwards, who has held that post for two decades, is drawing fire for not keeping up to date with voter records dealing with party affiliation.

The issue is centered around local voters who have a history of voting in Republican and Democratic primaries. When these voters change their names and addresses when applying for a new driver’s license, their voter I.D. card comes back listing them with no party affiliation (NPA), keeping them from voting in the primary.

Last month, the Winter Haven Sun reported that this was a recurring problem at the Polk County Supervisor of Elections office. Readers of the publication sent in letters that Edwards knew about the problem and did nothing about it.

Edwards said the problem existed. “It happens a few times a month,” said Edwards before pointing the finger at Tallahassee. She insisted that her office cannot fix the problem and only Tallahassee can.

“The problem is between two computer databases in Tallahassee that need to be upgraded and state officials claim there is not enough money allocated to do so,” said Edwards.

According to Edwards’ office, in order to fix this problem, the voter has to follow up and request a party affiliation change in order to be eligible to vote in the primary election.

Edwards drew fire from one of her opponents as she seeks another term.

“Why doesn’t Edwards accept the responsibility instead of blaming somebody else?” asked Debbie Hannifan, the former GOP state committeewoman for Polk County.

“It is shocking that, after multiple election cycles, Lori Edwards has done nothing to make sure all voters can vote. It makes me think the issue has been intentionally ignored to harm Republican voters and benefit her Democratic Party. Why hasn’t she fixed the problem?” demanded Brock Mikosky, a spokesman for the Hannifan campaign

Hannifan said voters from both parties have been turned away at the polls because of Edwards’ incompetence.

“Edwards is disenfranchising voters and the fact that she has known about this issue for years without finding a solution isn’t right,” said Hannifan.

Former Florida Sec. of State Mike Ertel, who served as Seminole County elections supervisor and is now an elections analyst, said if this is still happening, then the voter rolls might be inaccurate which could cause voters to lose the right to vote for a candidate of their choice in the primary elections. 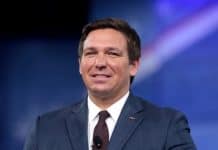 Ron DeSantis Takes Over in Tallahassee From Rick Scott