With the First Coast dodging a bullet with Hurricane Dorian, Nassau County and the Port of Fernandina believe they are well-positioned to help relief efforts in the Bahamas.

Laura DiBella, the executive director of the Nassau County Economic Development Board and the port director for the Port of Fernandina, weighed in on Friday.

“We feel blessed to have survived this horrific storm unharmed, and because of that, have been overwhelmed with requests to help our Bahamian partners,” DiBella said. “Discussions are underway to hold countywide fundraisers and collect much-needed supplies destined for the Bahamas. We also see an ideal opportunity to assist with our newly constituted container barge service, as its shallow draft can transport cargo to parts of the island that may not have the capacity to support container ships due to current restrictions.”

Chris Ragucci, the CEO of Worldwide Terminals Fernandina whose company runs the terminal, insisted the port is ready to go.

“The objective is to get aid to these people as quickly as possible and we have the resources to help, including berths, on-dock warehouses and terminal storage space that is ideally suited to handle relief cargoes being assembled for the Bahamas,” said Ragucci who added that the port’s location and capacity makes it a logical choice to help the Bahamas.

“We have the capability to handle any type of cargo, including containerized (stuffing & flat racks), breakbulk, project cargo, machinery, vehicles and heavy lift.  We are equally suited to receive cargoes by truck and rail, with on-dock rail service through the CSX rail system,” he said. “We have an experienced team of cargo handling professionals at the port, and we can provide end-to-end solutions with our trucking and logistics arm.”

“The key here is getting supplies to those that need them as quickly as possible,”  Ragucci added.

Back in March, U.S. Commerce Sec. Wilbur Ross showcased the port which has expanded in recent months, including $15 million in modernization efforts.  Earlier this year, the port started monthly vessel service with Netherlands based SDW Shipping. The port insists this service will dramatically expand its connections to Europe, Central and South America.

Last month, the U.S. Department of Transportation (DOT) named the port to its American Marine Highway which will help keep trucks off the roads and onto the waterways.

The designation, which U.S. Transportation Sec. Elaine Chao announced, also opens the door to more federal funds for the port which handled almost 300,000 tons of cargo last year with that number expected to be doubled this year.

“The designation of marine highways by Congress will help move cargo and people to help grow the economy and shift freight off of congested highways,” Chao said, noting that there are $7 million for ports included in the American Marine Highway.

U.S. Rep. John Rutherford, R-Fla., who sits on the U.S. House Appropriations Committee, supported including the port as part of the program.

“The port of Fernandina plays a crucial role in the economic development of Northeast Florida and spurs our reputation as a logistics hub of the Eastern Seaboard. By designating the port as part of the America’s Marine Highway Program, the U.S. Department of Transportation provides Fernandina Beach the tools they need to build on the incredible growth seen in recent years and to ease traffic congestion throughout the region. I thank Secretary Chao for her leadership and commitment to America’s seaports,” Rutherford said. 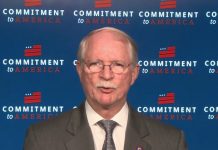