With protesters continuing to topple statues at parks and public spaces around the nation, a Florida congressman said he backed President Donald Trump’s call to protect national monuments.

U.S. Rep. Bill Posey, R-Fla., weighed in on the “destruction and desecration of several United States veterans’ memorials” this week. 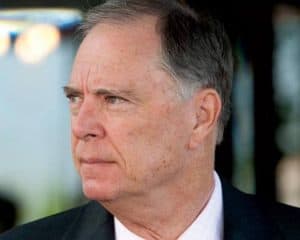 “One of the greatest privileges Katie and I have is greeting our World War II veterans as they depart on their honor flight to our nation’s capital to visit their memorial and greeting them in Washington DC, as they arrive on the National Mall. Their courage, and that of veterans since, has protected America and the freedoms we hold dear,” Posey said on Tuesday.

“The president’s call to protect our national monuments from vandalism and destruction should be taken very seriously by all.  The exercise of First Amendment Rights is guaranteed in our nation’s Constitution and is to be respected, but this exercise does not entitle anyone to destroy public or private property. Destroying and vandalizing United States veterans’ memorials is a violation of federal law and carries severe criminal penalties. Those who desecrate our memorials dedicated to our brave United States service men and women should be held fully accountable,” Posey added.