National Democrats are increasingly looking at trying to take Florida Republican U.S. Reps. Vern Buchanan and Gus Bilirakis down in November but new polls show both incumbents in good shape.

Saint Pete’s Polls looked at both races for Florida Politics and found the two Republicans with substantial leads over the top Democrats.

Buchanan takes 44 percent while Democrat David Shapiro gets 34.5 percent with 21.5 percent of those surveyed undecided.

Bilirakis holds an even larger lead, taking 49 percent over Democrat Chris Hunter, a former federal prosecutor and FBI agent, who pulls 30 percent with the rest of the voters undecided.

The races have garnered more attention lately with the Democratic Congressional Campaign Committee (DCCC) putting Shapiro in its “Red to Blue” program earlier in the month. 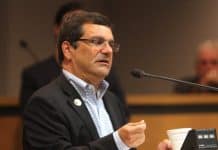 Gus Bilirakis Showcases Record Over a Dozen Years in Congress