Last week, U.S. Sen. Rick Scott, R-Fla., led more than a dozen of his Republican colleagues in a letter to U.S. Department of Homeland Security (DHS) Secretary Alejandro Mayorkas demanding information on the department’s plans to secure the border once the Biden administration rescinds Title 42.

The administration is reportedly planning to rescind Title 42, the rule which allows U.S. Customs and Border Protection (CBP) to prohibit entry into the United States to those who pose health risks such as COVID-19. The reversal of this rule is expected to cause another surge of illegal crossings at the southern border and exacerbate the already massive humanitarian and national security crisis on the U.S.-Mexico border.

We write to request information regarding the Department of Homeland Security’s (DHS) preparations and plans to secure the southern border given the potential reversal of Title 42. I/We understand that the Centers for Disease Control and Prevention (CDC) is potentially planning to lift its Title 42 public health policy that enabled the immediate expulsion of immigrants caught illegally entering the United States during the COVID-19 pandemic. This policy served as an effective deterrent to illegal border crossings by removing the prospect of an illegal alien being permitted to remain in and move freely throughout the United States pending the outcome of immigration proceedings. With this news, there are reports that thousands of migrants are waiting just south of the border in Mexico to cross illegally. Obviously, this is a grave concern that threatens to overwhelm our already strained immigration system and will only exacerbate a disastrous situation at our southern border.

In just one year under the Biden administration’s failed immigration policies, illegal border crossings soared to all-time highs. In 2021 alone, U.S. Customs and Border Protection (CBP) reported an alarming two million encounters with aliens illegally crossing the southern border, the highest number ever recorded in a single year. CBP reports that it encountered 154,745 aliens in January 2022 and 164,973 aliens in February 2022, representing a startling 63% increase from February 2021. This administration’s open border policies are fueling deadly criminal activity and horrific abuses by the barbaric cartels facilitating those illegal border crossings, including reports of sex trafficking, torture and forced labor.

The Department should be focused on securing our borders, enforcing all immigration laws and providing all necessary resources to CBP and U.S. Immigration and Customs Enforcement (ICE) to detain and remove all who violate our laws. Ensuring our frontline immigration officers have ample resources to secure the southern border is of critical importance – especially if Title 42 is potentially lifted, as reported. With this in mind, we request your prompt response to the following questions regarding your preparation and plans to deter and respond to the anticipated surge of illegal border crossings:

1. What is DHS doing to mitigate this expected surge, and how are you coordinating with other federal agencies to handle this influx of illegal migrants?

3. Is DHS providing the necessary intelligence to state and local law enforcement to help prepare for this surge?

4. Will you expedite the necessary resources and law enforcement personnel needed to confront this surge?

5. Are you prepared to request that additional U.S. troops, including members of the National Guard, support border patrol agents in advance of this surge? 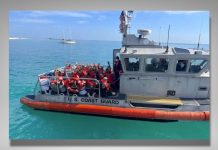