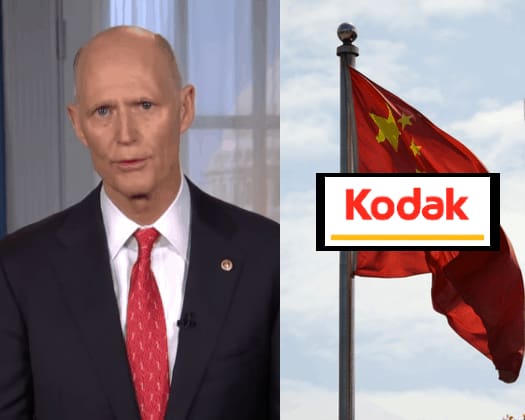 U.S. Sen. Rick Scott, R-Fla, wrote a letter this week to Eastman Kodak CEO James Continenza condemning Kodak’s recent decision to appease the Chinese regime by deleting an Instagram post sharing photos of the conditions in Xinjiang, where Communist China has built hundreds of concentration camps and is committing genocide against Uyghur Muslims. Kodak issued an apology to the Chinese Communist Party for the post.

I am writing to you to express my concern over Eastman Kodak’s (Kodak) decision to remove an Instagram post which exposed the shifting environment and conditions in Xinjiang as a result of Communist China’s genocide of Uyghur Muslims, and then to apologize to the Chinese Communist Party.

As reported last month, French photographer Patrick Wack made several trips to Xinjiang where he was heavily surveilled by Chinese Communist Party authorities and unable to fully photograph the true inhumane actions being taken against Uyghur Muslims. What he did see while he was in Xinjiang, he described as an “abrupt descent into an Orwellian dystopia.”

Mr. Wack used Kodak film to capture the photographs he took in Xinjiang and following his visit, Kodak shared his work on its Instagram account. Unfortunately, shortly after Kodak publicly shared these images, I understand that it received backlash from the Chinese Communist Party, which does not allow its citizens to even access Instagram, prompting Kodak to remove Mr. Wack’s work from its social accounts. After deleting the images, Kodak made a separate post stating that, “[its] page is intended to enable creativity by providing a platform for promoting the medium of film. It is not intended to be a platform for political commentary.” In another statement made on the Chinese social media site WeChat, Kodak fearfully apologized to the Chinese Communist Party, saying, “For a long time, Kodak has maintained a good relationship with the Chinese government and has been in close cooperation with various government departments. We will continue to respect the Chinese government and the Chinese law. We will keep ourselves in check and correct ourselves, taking this as an example of the need for caution.”

We know that General Secretary Xi is actively leading a genocide against more than a million Uyghurs in Xinjiang. The United States, the Netherlands, Canada, Lithuania and the United Kingdom have all declared Communist China guilty of genocide. In fact, human rights reports have shown that the Communist Chinese government is guilty of violating every provision of the U.N. Genocide Convention.3 Across Xinjiang, the Communist Chinese government has built hundreds of concentration camps where it can imprison, torture and enslave more than a million Uyghurs at any given time, simply because of their religion. Children are separated from their parents and pressured to renounce their Uyghur heritage. Unspeakable crimes, including forced abortion and forced sterilization, have been committed against women. Video footage has shown blindfolded Uyghurs being loaded onto trains and transported to the concentration camps. And even when Uyghurs manage to leave the country, the Chinese Communist Party uses social media to intimidate and track them.

The ongoing abuses in Communist China are despicable. Kodak’s decision to delete these photos, essentially censoring its own content, only empowers Communist China to continue these abuses against the Uyghurs and other Muslim minorities in Xinjiang. As an American company headquartered in New York and incorporated in New Jersey, Kodak should be standing for American values and against our foreign adversaries. I am deeply concerned by Kodak’s decision to not only delete Mr. Wack’s photos from Instagram, but also to issue gross apologies to the Chinese Communist Party. Following these disturbing actions, I am requesting that Kodak provide answers to the following questions within 30 days:

1. Why did Kodak apologize to Communist China?

2. Will you repost Mr. Wack’s photographs? If not, why?

3. What is the nature of Kodak’s “close cooperation” with the Chinese Communist Party?

4. Does Kodak employ members of the Chinese Communist Party?

5. Are all of Kodak’s supply chains free from Uyghur forced labor?