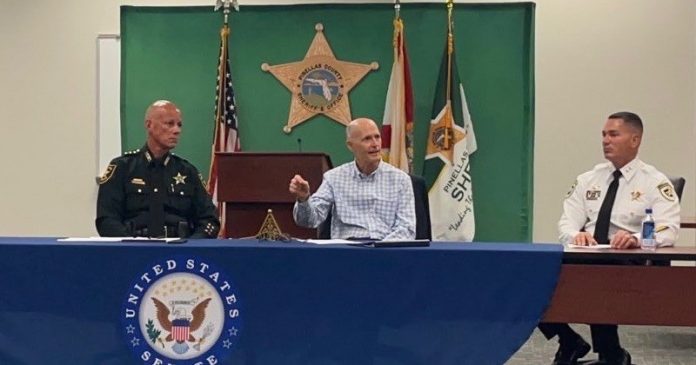 Scott introduced the bill at the start of the month and weighed in on it on Tuesday.

“As the opioid epidemic and fentanyl crisis continue to be the leading cause of death for Americans aged 18 to 45, this six-pronged legislation provides state, local and federal agencies, in partnership with health care providers and first responders, much-needed tools and resources to combat this crisis and save lives,” Scott’s office noted.

“For far too long, families in Florida and across America have suffered the pain and loss that comes with drug addiction and overdose. We have already lost hundreds of thousands of Americans to the opioid epidemic, but now this horrific crisis is being fueled at levels not seen before by massive amounts of deadly fentanyl flowing illegally over our southern border into our communities. The failed open border and amnesty policies implemented by President Joe Biden have only made this flow of illegal drugs worse and we must put an end to it. That’s why I am introducing the STOP FENTANYL PACKAGE Act. This legislation encourages coordination and partnership between our state, local and federal partners to help fight this crisis that is hurting so many people across the country. We need all hands on deck and every tool at our disposal to fight back against the lethal opioid epidemic so we can stop these completely preventable deaths and save lives,” Scott said.

According to the senator’s office, the proposal includes the following:

• Professional and civil liability protections for health care providers, first responders, and lay administrators who take training on the proper administration of an opioid antagonist, if they administer such antagonist in good faith except in cases of gross negligence or willful or wanton misconduct.

• Data collection on overdose-related deaths by directing the Attorney General and Secretary of HHS to collect more accurate data on overdose related deaths through the vital statistics managements systems of the States.

• Law enforcement grants to improve response in the community by allowing the Attorney General to award grants to local law enforcement agencies in communities with high rates of overdoses to provide training to help officers better identify overdoses, upgrade essential systems for drug tracing and forensic laboratories, and provide training to better trace criminals through the darknet.

• Provide necessary funding for the Fentanyl Profiling Program, which allows the DEA to better collect data on the drugs across the country and trace them through the illegal market.

• Improve efficiency and results of the State Opioid Response Grants by directing the Assistant Secretary for Mental Health and Substance Use to include an assessment of challenges faced by grant recipients in their annual report to Congress and provide grant recipients with best practices on how to obtain the best results in fighting opioid overdose.

Scott’s bill was sent to the U.S. Senate Health, Education, Labor, and Pensions Committee. So far, there is no companion measure in the U.S. House and no co-sponsors in the Senate.