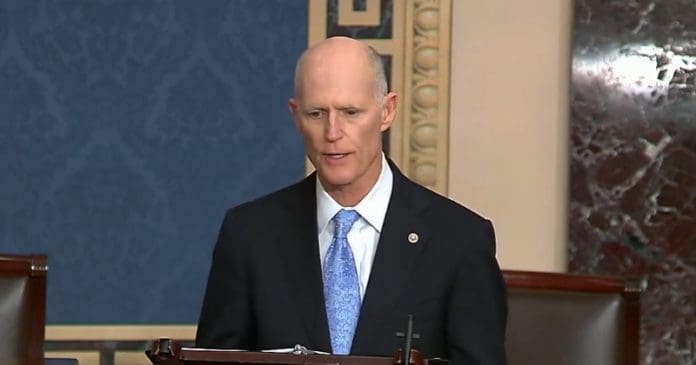 On Wednesday, U.S. Sen. Rick Scott, R-Fla., spoke on the Senate floor about the impact of President Joe Biden’s energy policies are having on Florida families.

“Last month, I heard about a church in St. Petersburg, just south of Tampa, that makes hot meals for those who have fallen on tough times. Like many other churches across the country, they started making the meals for Thanksgiving. But this church decided to keep it going, and since then they’ve made thousands of hot meals for families.

“Here’s the problem…fewer people are coming because those families who need the food now can’t even afford to make the trip because gas is so expensive. The poorest families in my state are having to make the impossible choice of sacrificing a hot meal because they can’t afford to put gas in their cars.

“I want to reiterate this point, because I want my Democrat colleagues who, like Joe Biden, think inflation is a “high-class problem” or some “incredible transition” to understand the gravity of this administration’s inflation crisis. Families in my state of Florida are having to turn down an opportunity for a free hot meal because they can’t afford the gas to go over to the church and get it.

“It makes me furious to see this happening in my state and all across our great country, all the while President Joe Biden does nothing to fix it. He’s done nothing.

“As of today, the average price of a gallon of gas is $4.63.The day Joe Biden took office gas was averaging $2.37 per gallon. According to the U.S. Energy Information Administration, in 15 different months of Joe Biden’s presidency, the national average for gas prices has risen. But the Democrats up here don’t seem to care.

“You all may remember how last month, the senior senator from Michigan explained during a hearing of the Finance Committee that, unlike her constituents, she doesn’t worry about gas prices because she has the means to afford an electric car. She actually said that. Then, when she gets to work in Washington she gets to charge her car at the Capitol for free while taxpayers foot the bill! Good for her. But that’s not a realistic solution for the millions of Americans suffering under the Biden’s administration’s failed energy policy.

“Democrats in Washington know the effect these high prices are having. And they are celebrating because their radically progressive campaign against energy independence is working. But Americans are not celebrating. They’re struggling, and unlike the liberal elites running our government, I’m not going to stand for it.

“That’s why earlier this year, I introduced the FREE American Energy Act to expedite the federal agencies’ review process of applications for permits, waivers, licenses, or other authorizations related to energy production. And it’s why I’ve introduced the GAS PRICE Act. It would direct the Energy Information Administration to report to Congress any policy or rule set by the Biden administration which raises energy costs for American families. I even asked the Senate to pass the GAS PRICE Act by unanimous consent this past October, but Senate Democrats blocked its passage. It’s as if they want to keep Americans in the dark on why energy prices are rising.

“We also need to speed up the approval process for oil permitting, and Americans need to know that this administration is purposely trying to make life more difficult and more expensive. We have the resources within our borders to be energy independent and for everyday life to be affordable. And while we are ramping up American production, we need to completely halt sales of U.S. oil to Communist China. That’s right, while gas prices remain sky-high here at home the Biden administration is still giving a green light for American oil to be sold to our enemies like Communist China. I was proud to join with my friend and fellow Floridian, Senator Marco Rubio, to introduce the China Oil Export Prohibition Act last month to stop these sales.

“We shouldn’t be helping our enemies or asking foreign nations to increase supply. We should be increasing our supply within our own borders. We did it during the Trump administration and we can do it again.

“Joe Biden can roll back the countless regulations he instituted that are hurting our domestic production. The White House, the EPA, the Department of Interior, and the Department of Energy can end their campaign against American oil producers and start working to create an agenda of energy independence. Congress can pass my legislation to make oil permitting faster and give greater transparency into the impact legislation from Congress has on energy prices.

“We don’t have to throw up our hands and give up. Joe Biden and the Democrats who control Washington can and must take real action to start producing energy in our borders once again.

“Our future is bleak if we don’t.”