“The resolution would help further strengthen the already-robust trading relationship between the U.S. and the U.K. In 2019, the total Anglo-American trade in goods and services was $273 billion, and the U.K. was the U.S.’s seventh-largest trading partner in goods. Additionally, the U.K. market’s appetite for U.S.-made goods is flourishing. The United States held a $21.8 billion total trade surplus with the U.K. in 2019, and American exports of goods and services to the U.K. supported an estimated 665,000 U.S. jobs in 2015,” Lee’s office noted.

Lee’s resolution has drawn strong support from the Republican minority in the Senate including Scott and U.S. Sens. Mike Braun of Indiana, Kevin Cramer of North Dakota, John Cornyn and Ted Cruz of Texas, Deb Fischer of Nebraska, James Lankford of Oklahoma, Jerry Moran of Kansas and Mike Rounds of South Dakota.

“For more than 100 years, throughout times of change and tumult, the U.S. and the U.K. have been staunch and stalwart allies in the fight to combat terrorism, and to secure freedom, peace, and prosperity,” said Lee. “In the post-pandemic economic and geopolitical climate, and with the U.K.’s newfound ability to negotiate independent free trade deals, the American and British peoples have the opportunity to once again join forces. This resolution would strengthen our special relationship and economic partnership, for the benefit of our nations and nations across the globe.”

“The United States and United Kingdom have a unique opportunity to grow our economies and cement a free and equitable trade agreement,” said Scott. “As our nations face growing threats, including that of Communist China, we must work together and stand united for freedom and democracy. Our resolution stresses the need for a strong free-trade agreement with one of our nation’s greatest allies, and urges President Biden to pursue this great opportunity and reach a deal that is positive for both our nations.”

Lee’s resolution was sent to the U.S. Senate Finance Committee. 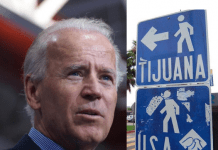 Rick Scott: More than 2 Million Illegal Immigrants Entered U.S. in 2021 and Biden is Doing Nothing