At the end of last week, Florida joined states from across the nation, including Texas, Indiana, Missouri, Montana, Oklahoma, Arkansas and Alaska in filing suit against the Biden administration for reinstating the Central America Minors (CAM) Program.

“The Biden administration continues to disregard the laws of this country and allow massive numbers of illegal aliens across the border, without regard to possible criminal backgrounds or connections to illicit activity,” said Gov. Ron DeSantis. “Not only are these illegal aliens allowed free reign in this country, but the administration also pushes the burden and costs onto the states and ignores the consequences of its policies. I’m glad that Attorney General Moody is helping to block the reckless immigration policies of the Biden administration.”

“After seeing the chaos in person, it is even more clear to me now that Biden and Mayorkas are building their own illegal organization to transport illegal immigrants into and around our country – thumbing their noses at federal laws,” said state Attorney General Ashley Moody. “I will not only work aggressively to stop these illegal acts, but I will continue to inform Floridians about what their federal government is actually doing, and the dangers associated with those decisions.”

“The Biden Administration’s open border policies are disastrous and creating a human trafficking and child sexual exploitation crisis,” said Lt. Gov. Jeanette Nuñez. “By filing this suit, we are holding the federal government accountable for refusing to enforce the law and secure our borders, which puts every Floridian at risk.”

“The CAM program is a brazen abuse of the federal government’s parole authority. It allows foreign nationals from the Northern Triangle – El Salvador, Guatemala, and Honduras – many of whom are already in the country illegally, to bring their children (including adult children up to the age of 21) and other family members into the country, even if they do not qualify for asylum or refugee status. The federal government’s parole authority is only meant to be exercised on a case-by-case basis for urgent humanitarian reasons and significant public benefit. Granting broad based parole without individualized findings is a blatant violation of federal immigration law. This illegal program should be terminated immediately,” insisted the governor’s office. 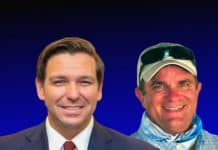