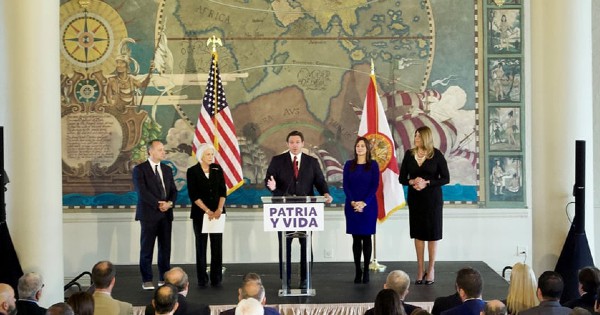 This week, Gov. Ron DeSantis said he will call on the Legislature to send $25 million to Miami-Dade College “to preserve, refurbish and enhance the Freedom Tower.”

DeSantis said he will include the funds in the 2022-2023 budget he will send to the Legislature when it meets at the start of next year while his office played up its importance to the Cuban-American community.

“For nearly 100 years, the tower has been a symbol of freedom and democracy, becoming an integral part of the Miami skyline. From 1962 to 1974, the Freedom Tower became one of the most recognizable historic buildings in Florida as the place where Cuban refugees would be taken for assistance after fleeing the communist regime and landing in Florida,” the governor’s office noted. “Governor DeSantis made this announcement while people on the island of Cuba continue to fight against the totalitarian communist regime. Over the weekend, Cuban Americans in Miami rallied in support of the Cuban people while the oppressive Cuban dictatorship continues to crack down on and intimidate protestors on the island.”

“I am proud to announce that in my upcoming legislative budget recommendations, we will be proposing a $25 million investment in the Freedom Tower to preserve this monument for future generations,” said DeSantis. “After the Communist Regime took over in Cuba, hundreds of thousands of people fled and came to Florida to have a chance at freedom – now it is our responsibility to carry on that legacy. We will continue to make sure the Freedom Tower remains one of the premier symbols of freedom and liberty in our nation. This investment is even more important today, when as a nation we have the opportunity to join the cause of the people who are fighting for freedom on the island of Cuba. While Florida continues to stand for democracy on the island, so far, we have seen almost no support whatsoever from the Biden Administration. As we propose more funding for the Freedom Tower today, I once again call on President Biden to step up to the plate and help the people of Cuba who are risking their lives to fight the dictatorship.”

“It truly is an honor to join Governor DeSantis as we propose $25 million to restore the Freedom Tower – an iconic building that is the embodiment of the American Dream,” said Lt. Gov. Jeanette Nuñez. “Many Americans who call Florida home are united in preserving history. Let us join the rallying cries of the freedom seeking people of Cuba demanding their God-given rights. Governor DeSantis and I will always stand on the side of libertad.”

In the meantime, the Democrats running to challenge DeSantis next year showcased their support for the continued protests against the Cuban regime. State Sen. Annette Taddeo, D-Miami, filed a resolution in Tallahassee “expressing solidarity with the people of Cuba, support of democracy, and an explicit condemnation of the oppressive nature of the Cuban regime against peaceful demonstrators.”

“I filed this resolution…in solidarity with the Cuban people, oppressed for 62 years by the totalitarian Castro dictatorship, as they stage mass protests in Cuba, calling for freedom and an end to the communist regime. In July the world witnessed one of the largest movements in Cuba’s history, and those brave peaceful protesters were faced with mass arrest, violence, and attempts at silencing voices. The regime is so afraid of today’s peaceful demonstrations, that they have outlawed the wearing of white clothing, the selling of white roses or any white flower, and even the hanging of white sheets from their balconies. They have also surrounded the homes of dissidents with guards, preventing them from leaving their homes to peacefully protest. This heavy-handed response to 15N from the regime further proves the weakness of the totalitarian regime and we stand united with the Cuban people in their call for liberty and their stand against the oppressive communist regime,” Taddeo said on Monday.

“I proudly stand with the Cuban people as they speak out for change against a violent and cruel regime that only seeks to silence their pain,” Crist said. “Their protests are a testament of strength and resilience. The U.S. and Florida must continue to support the Cuban people.”

“I stand with the Cuban people,” said Florida Agriculture Commissioner Nikki Fried. “And I invite you all to join me in this fight to make real change.”