Last week, Governor Ron DeSantis, along with the Florida Delegation of the Southeast U.S./Japan Association, Inc. (‘SEUS/Japan’) announced that Florida will be the host for the 44th Annual SEUS/Japan Joint Meeting Program in Orlando November 16-19, 2022, and that Eric Silagy, the president and CEO of Florida Power & Light Company (FPL), will serve as chairman of the meeting along with his Japan co-chair, Mr. Masaaki Tsuya, and external advisor for the Bridgestone Corporation.

Florida has the honor and privilege to host the meeting and showcase the entire state to Japan and its regional partners once every 14 years, under the host rotation system with six other states and Japan.

“For 46 years, SEUS/Japan has worked to strengthen Florida’s economic and cultural ties with Japan, and my administration remains committed to furthering that partnership,” said DeSantis. “Florida is home to approximately 200 Japanese companies and trade between Florida and Japan surpassed $6.8 billion in 2021 as Florida’s sixth-largest trade partner. We look forward to strengthening this partnership by hosting the 44th Annual Joint Meeting here in the Sunshine State and I’m pleased to announce Eric Silagy as chairman of the 44th meeting.”

Silagy, who was appointed FPL’s president in 2011 and CEO in 2014, leads the team that serves more than half of Florida with electricity that’s consistently among the cleanest and most reliable in the country, for a price that’s well below the national average. In addition to leading the effort to continue building a more resilient and sustainable energy future Floridians can depend on, Silagy is passionate about FPL’s role in helping to grow Florida’s economy. FPL’s Office of Economic Development – developed at Silagy’s direction in 2011 to help Florida climb out of the Great Recession – has worked to relocate or expand nearly 220 company locations in Florida, representing 106,000 new and retained jobs and $103 billion in total economic impact statewide.

“SEUS/Japan is not only vital to bolstering and diversifying Japan’s economic ties with Florida but also the rest of the southeastern United States,” said Silagy. “I look forward to serving as chair of this meeting as we continue to advance transportation infrastructure, connectivity and cultural ties to make our state the ideal location for Japanese investment and trade.”

“We are thrilled to have the support of such a highly-regarded business leader as Eric Silagy,” said Keith Norden, the board chairman of the SEUS/Japan Florida Delegation. “His solid reputation throughout the state will help attract other business leaders interested in this exclusive opportunity to establish business relationships with leading Japanese corporations.”

“Approximately 200 Japanese businesses have a footprint in Florida, thanks in no small way to the annual SEUS/Japan joint meeting program,” said Dave Woodward, the executive director of the SEUS/Japan Association. “I am looking forward to continuing this relationship next November here in the Sunshine State.”

“Florida is well known in Japan as one of the world’s leading tourist destinations and exporters of citrus fruits. The SEUS/Japan meeting is a great opportunity for Japan and Florida to strengthen ties in aerospace and life sciences industries,” said Japanese Consul General Kazuhiro Nakai. “I am looking forward to celebrating our long-standing diplomatic and economic ties in Florida next year, which will coincide with the 30th anniversary of the Consulate General of Japan in Miami.”

“Governor DeSantis recognizes the importance of Florida’s economic ties to Japan, and SEUS/Japan has been instrumental in strengthening Florida’s relationship with Japan,” said Sec. Dane Eagle of the Florida Department of Economic Opportunity (DEO). “I look forward to the meeting next year and continuing to enhance this vital relationship and attract new investment to bolster our state’s economy.”

The relationship between Florida and Japan is crucial to ensuring Florida’s economy remains the 15th largest in the world. SEUS/Japan is vital to bolstering and diversifying Florida’s economic ties along with the rest of the southeastern United States. Florida continues to advance transportation infrastructure, connectivity, cultural ties, and a multi-lingual workforce – making Florida the ideal location for Japanese investment and trade. The SEUS/Japan Association is essential to the strong and long-lasting relationship between the southeast United States and Japan.

“Florida is proud to have more than 22,000 jobs from Japanese-owned firms that provide Floridians with opportunities to succeed,” said Acting Florida Secretary of Commerce Marc Adler, the president and CEO of Enterprise Florida, Inc. “The SEUS/Japan meeting offers a great venue to continue promoting trade, investment, and strengthen our friendship between Japan and the Southeastern United States.”

“Florida values our strong cultural and economic ties with Japan,” said Florida Secretary of State Laurel Lee. “With the 44th annual SEUS/Japan Joint Meeting, we look forward to strengthening our diplomatic relationship, honoring our shared values, and enhancing strong economic ties between Florida and Japan for the benefit of all Floridians.”

“With 220,000 Japanese tourists visiting Florida annually from 2015-2019, our state remains a key economic partner with Japan,” said Dana Young, the president and CEO of VISIT Florida. “Florida is honored to host the SEUSS/Japan which serves as an opportunity to strengthen our business collaboration.” 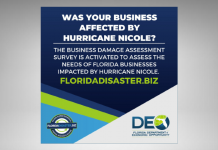