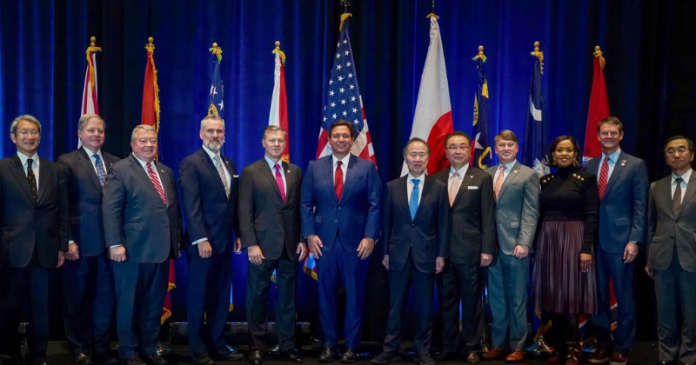 At the end of last week, Gov. Ron DeSantis welcomed a diplomatic delegation from Japan to Florida and provided the keynote address for the opening ceremony of the Southeastern United States – Japan Conference (SEUS-Japan).

Throughout the day, DeSantis met with leading officials from Japan, including Koji Tomita, the Japanese ambassador to the United States, as well as key Japanese business leaders. DeSantis expressed his interest in maintaining and growing Florida’s strategic partnership with Japan as a country with the shared values of democracy, human rights, and a belief in the free market economy.

Japan is Florida’s third largest bilateral trading partner, with annual trade surpassing $7.7 billion annually. Florida is also home to over 200 Japanese firms that invest billions into the state’s economy. DeSantis said he believes that this partnership can grow even further with the potential for direct flights between Japan and Florida which would enhance the people-to-people ties that allow entrepreneurship and tourism to flourish.