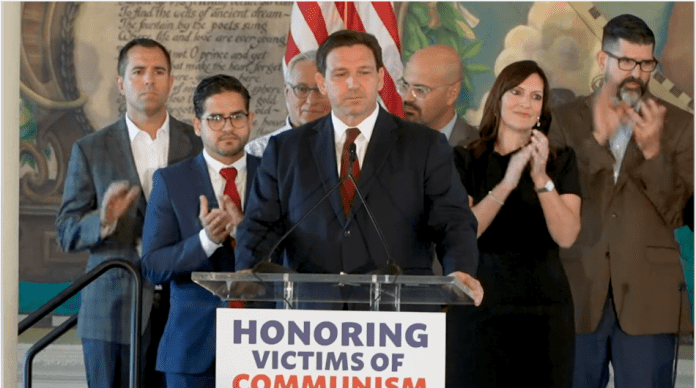 This week, Gov. Ron DeSantis signed a bill establishing November 7 as “Victims of Communism Day” to honor the hundreds of millions of people who have suffered under communist regimes across the world.

The governor also announced that he will approve $25 million in the budget to support renovations and restoration of the historic Freedom Tower in downtown Miami. Additionally, he signed a bill to approve road designations across the state, including three designations to honor brave Cubans who fought against the Castro regime.

“Honoring the people that have fallen victim to communist regimes and teaching our students about those atrocities is the best way to ensure that history does not repeat itself,” said DeSantis. “Through HB 395 and the funding announced today, we are guaranteeing that the history of those who fled communist regimes and their experiences are preserved and not forgotten by our students. While it’s fashionable in some circles to whitewash the history of communism, Florida will stand for truth and remain as a beachhead for freedom.”

“Thank you, Governor DeSantis, for your continued leadership and to the Legislature for providing this critical funding for Miami’s Freedom Tower and designating November 7th as Victims of Communism Day,” said Lt. Gov. Jeanette Nuñez. “House Bill 395 educates this generation of children and future generations about the ideology, history, and horrors of communism so that freedom will always remain alive in the Sunshine State.”

The bill establishes November 7 as “Victims of Communism Day” and calls for public schools to observe the day. High school students will be required to receive at least 45 minutes of instruction in their required United States Government class on topics related to communist regimes and how victims suffered at the hands of these regimes. Instruction on these topics will be required starting in the 2023-2024 school year.

“I stand here today to speak on behalf of the 120,000 students of Miami Dade College, 75 percent of whom are Hispanic, and many whose parents and grandparents fled communism to give them the opportunity to come here,” said Madeline Pumariega, the president of Miami Dade College. “Your investment here ensures that there will be someone standing here in the next hundred years, ensuring that the story of my parents, of our parents and our grandparents is told over and over again. We will continue to preserve the legacy of those that we know and those that we do not know.”

“Next July will mark the tenth anniversary of the killing of my father at the hands of the Cuban regime,” said Rosa María Payá, a Cuban human rights activist. “As thousands of Cubans have done before and as we talk today, at least 1,000 Cubans are suffering political imprisonment for peacefully marching demanding freedom. It is time to stop this process, this factory of victims of communism. I appreciate this initiative and the fact that we are honoring the victims of communism by teaching young people about the evils of communism and the moral obligation we have to stop it.”

$25 million in funding will be given to Miami Dade College to support preservation and enhancement of the Freedom Tower, currently home to the Miami Dade College Museum of Art and Design. The Museum houses the Cuban Legacy Gallery and the Exile Experience which honors the legacy of Cuban Americans. The Freedom Tower was used for the Cuban Assistance Center in the 1960s to help Cubans fleeing the communist regime access resources for their new lives in the United States.

The funding will be used to complete urgent structural repairs, conserve and restore historical architectural components, install museum-quality climate control and security systems to safeguard pieces housed in the museum, enhance museum exhibits and make the building more accessible for people with disabilities.