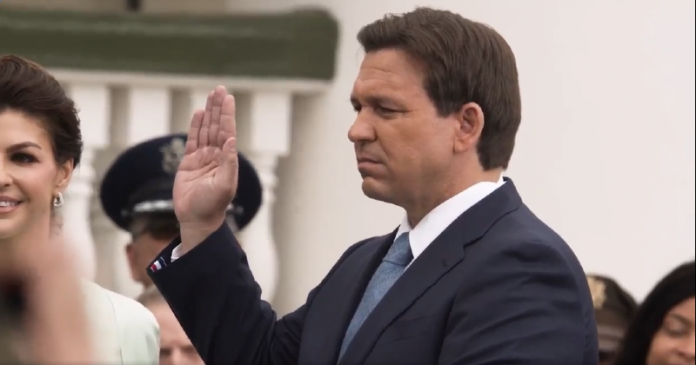 With buzz building that he could run for the Republican presidential nomination in 2024, Gov. Ron DeSantis contrasted Florida with the rest of the nation in his second inaugural address on Tuesday.

“Over the past few years, as so many states in our country grinded their citizens down, we in Florida lifted our people up,” DeSantis said as he started his second term. “When other states consigned their people’s freedom to the dustbin, Florida stood strongly as freedom’s linchpin.When the world lost its mind – when common sense suddenly became an uncommon virtue – Florida was a refuge of sanity, a citadel of freedom for our fellow Americans and even for people around the world. In captaining the ship of state, we choose to navigate the boisterous sea of liberty rather than cower in the calm docks of despotism. We face attacks, we take hits, but we weather the storms, we stand our ground, and we do what is right.”

“We have refused to use polls and to put our finger in the wind – leaders do not follow, they lead,” DeSantis insisted. “We have articulated a vision for a free and prosperous state. We have, through persistence and hard work, executed on that vision. We have produced favorable results.And now we are here today because the people of Florida have validated our efforts in record fashion. Florida shows that results matter. We lead not by mere words, but by deeds.”

Covering a host of conservative issues–from taxes to education reform to naming judges to backing law enforcement–DeSantis took aim at the left.

“It is often said that our federalist constitutional system – with fifty states able to pursue their own unique policies – represents a laboratory of democracy,” the governor said. “Well these last few years have witnessed a great test of governing philosophies as many jurisdictions pursued a much different path than we have pursued here in the state of Florida.The policies pursued by these states have sparked a mass exodus of productive Americans from these jurisdictions – with Florida serving as the most desired destination, a promised land of sanity. Many of these cities and states have embraced faddish ideology at the expense of enduring principles. They have harmed public safety by coddling criminals and attacking law enforcement. They have imposed unreasonable burdens on taxpayers to finance unfathomable levels of public spending. They have harmed education by subordinating the interests of students and parents to partisan interest groups. They have imposed medical authoritarianism in the guise of pandemic mandates and restrictions that lack a scientific basis.

“This bizarre, but prevalent, ideology that permeates these policy measures purports to act in the name of justice for the marginalized, but it frowns upon American institutions, it rejects merit and achievement, and it advocates identity essentialism,” he added. We reject this woke ideology.We seek normalcy, not philosophical lunacy! We will not allow reality, facts, and truth to become optional. We will never surrender to the woke mob. Florida is where woke goes to die!”

DeSantis also tried to contrast his record in Tallahassee with Democrats’ actions in Washington.

“Florida’s success has been made more difficult by the floundering federal establishment in Washington, D.C.,” DeSantis insisted. “The federal government has gone on an inflationary spending binge that has left our nation weaker and our citizens poorer, it has enacted pandemic restrictions and mandates – based more on ideology and politics than on sound science – and this has eroded freedom and stunted commerce. It has recklessly facilitated open borders: making a mockery of the rule of law, allowing massive amounts of narcotics to infest our states, importing criminal aliens, and green lighting the flow of millions of illegal aliens into our country, burdening communities and taxpayers throughout the land. It has imposed an energy policy that has crippled our nation’s domestic production, causing energy to cost more for our citizens and eroding our nation’s energy security, and, in the process, our national security. It wields its authority through a sprawling, unaccountable and out-of-touch bureaucracy that does not act on behalf of us, but instead looms over us and imposes its will upon us.

“The results of this have been predictably dismal,” he continued. “This has caused many to be pessimistic about the country’s future. Some say that failure is inevitable. Florida is proof positive that We the People are not destined for failure. Decline is a choice. Success is attainable. And freedom is worth fighting for. Now fighting for freedom is not easy because the threats to freedom are more complex and more widespread than in the past – the threats can come from entrenched bureaucrats in D.C., jet-setters in Davos, and corporations wielding public power.
But fight we must.”

Even with former President Donald Trump already running for the Republican presidential nomination, DeSantis continues to garner notice as a potential candidate. With strong Republican majorities in both chambers of the Legislature, DeSantis has the luxury of holding off on launching a presidential bid to focus on governing and producing results in Tallahassee. If he plays his cards right, DeSantis might be able to contrast his record with those of some of his Republican rivals. At the national level, the GOP has something of a problem with governing–as was pretty evident from the process to name a speaker of the U.S. House on Tuesday.

While they control less than a third of the seats in the Legislature, Democrats, including House Democratic Leader Fentrice Driskell, D-Tampa, took aim at the governor after his address. Driskell said DeSantis was far more focused on playing on the national stage than his job in Tallahassee.

“This is probably the first Florida governor to give an inaugural speech not speaking to the people of our great state and the challenges we all face, but directed at GOP primary voters and billionaire donors,” Driskell said. “Any time he wants to distract from his own failed record, he creates a new fake ‘woke’ boogeyman to battle but doesn’t really address real issues Floridians are struggling with like housing affordability and health care that doesn’t bankrupt families. We’ve had two special sessions to address the property insurance crisis and nothing has been done to actually give relief to Floridians who can no longer afford to live in Florida.

He speaks of freedom but that’s not what his track record shows. It only took him only a few lines into his speech to begin rewriting the history of his COVID response. He claimed ‘results matter,’ but Florida has had an unacceptable 83,000 deaths from the pandemic. He brags about our state’s success without mentioning the record funding that came from the Biden administration to stabilize our economy. He claims to support law enforcement and ‘law & order’ yet he proudly pushes an extremist NRA-backed Unregulated Carry that will mean thousands of hidden guns being carried by unlicensed people across the state. What could be more ‘soft on crime’ than making it easier for criminals to carry guns on our streets? We should never confuse ‘soft on crime’ with ‘smart on crime,’ and this is not a smart plan,” she added. “Overall, I wasn’t surprised by what he said, but I was predictably disappointed.”

That might not be the best plan–former Gov. and U.S. Rep. Charlie Crist, D-Fla., did not exactly score points when he went after DeSantis’ potential national ambitions in last year’s election–though it’s not as if the Democrats can do much to stop the governor in Tallahassee. In the months ahead at least, the main focus of Florida politics will be DeSantis and his potential 2024 aspirations as Democrats at the national level and Trump’s team get ready for him. As he started his second term on Tuesday, DeSantis sounded like he was ready to claim a larger place on the national stage.