A congressman from the Sunshine State is backing U.S. Rep. Rodney Davis’, R-Ill., proposal to “ensure the federal permitting process and related environmental reviews would be more efficient and less time-consuming.”

Davis brought out the “One Federal Decision Act” last week and Spano threw his support behind it. Spano weighed in on the bill at the end of last week.

“America’s infrastructure, whether we are talking highways, airports or bridges are in serious need of repair in our country. The goal of our legislation is to speed up construction projects to save taxpayers both time and money,” said Spano on Friday. “Bringing the federal bureaucracy into the 21st century will not only improve our infrastructure but would also create valuable jobs rebuilding our nation—all while investing in our future!”

“This bill reinforces President Trump’s One Federal Decision Executive Order which was signed in August of 2017. Trump’s EO modernized the project permitting process by placing timelines for government completion of environmental reviews and consolidating the process across federal agencies,” Spano’s office noted.

“It is estimated that a six-year delay in starting construction public projects costs the nation (and taxpayers) more than $3.7 trillion in lost employment/economic gain. Currently, federal agencies take an average of up to 5 years to complete environmental reviews,” Spano’s office noted. 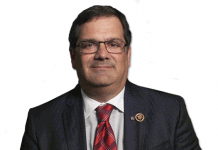