The AFBF awarded Spano with the “Friends of Farm Bureau” due to “his leadership in supporting Florida’s farming and ranching communities.” The Florida Farm Bureau nominated Spano for the award and the AFBF’s Board of Directors approved it.

Spano weighed in on the honor on Tuesday.

“Since arriving to Congress, I’ve worked hard to protect the livelihoods of those in our district, including our ranchers and farmers. For our area, agriculture is more than just an industry—it’s our history and our passion. I’m honored to receive this award on behalf of all constituents and I look forward to continuing fighting on behalf of all district residents,” said Spano.

After serving in the Florida House, Spano was elected to an open congressional seat in 2018. But Spano was hurt after reports that he improperly loaned his campaign more than $100,000. Spano was defeated by Lakeland City Commissioner Scott Franklin in August’s Republican primary. Franklin won last week’s election over Democrat Alan Cohn, keeping the seat for the Republicans. 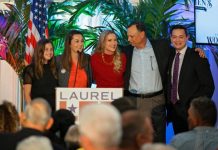