With the Legislature meeting in Tallahassee in January to kick off the regular session, this week, state Sen. Victor Torres, D-Orlando, and state Rep. Kristen Arrington, D- Kissimmee, filed a proposal “to prevent unpaid HOA fines from becoming liens that could lead to properties being seized” and another bill “which would repeal the ability for HOAs to issue fines.”

“These pieces of legislation would ensure that excessive fines imposed by homeowners’ associations would not result in property owners losing their homes,” Arrington’s office noted.

The two Central Florida Democrats weighed in on why they introduced the proposals.

“Homeowners’ associations have the ability to fine residents up to $1,000 per infraction with little recourse for property owners,” said Arrington. “Many of our older homeowners are on fixed incomes and are not able to pay these sorts of fines, then facing the possibility of losing their homes. This legislation would keep residents in their homes.”

“Every legislative session I file bills relating to Homeowner Association reforms that help protect residents from over-zealous HOA fines and penalties,” said Torres. “I am honored to work with Representative Arrington this year on reducing fine amounts and limiting the ability of HOA’s to assign liens against residents in those communities.” 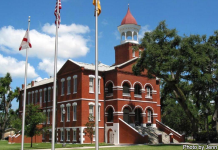