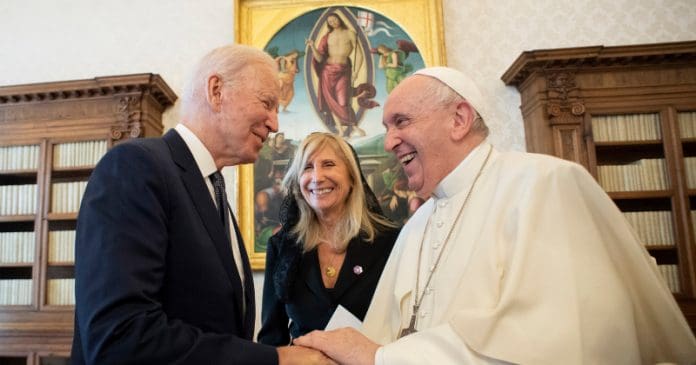 Neither Republicans nor Democrats have a clear edge with Catholic voters nearly four months before the pivotal midterm elections that will determine control of Congress and how much of President Biden’s agenda will get passed in the next two years, according to an in-depth new survey of American Catholics.

Overall, likely voters identifying themselves as Catholic are split nearly evenly in their preference for Congress: 44 percent indicated support for the Republican candidate in their district, while 43 percent support the Democrat – with a significant bloc of 13 percent undecided.

Despite this political divide, a key indicator of voter concern – whether the country is on the right or wrong track – should set off alarm bells for the Biden administration and Democrats, who control both chambers of Congress.

Some 59 percent of all Catholics said the country is on the wrong track, including 68 percent of white Catholics and 45 percent of Latino Catholics, compared to 24 percent who thought it’s headed in the right direction.

While those figures demonstrate widespread pessimism among Catholics, the rest of the country is even more discouraged about the country’s path forward. The RealClearPolitics average of most recent polls shows an overwhelming 75.1 percent of voters believe the country is off-course, compared to just 18 percent who say it’s on target.

These are among the findings in the latest survey of Catholic voter mood by RealClear Opinion Research in partnership with Catholic-themed television network EWTN. The national survey of 1,757 Catholic likely voters is the first of It was conducted online in English and Spanish from June 15-23, immediately before the Supreme Court overturned Roe v. Wade, ruling that there is no longer a federal constitutional right to an abortion.

The dramatic difference of opinion within the broader group of all voters identifying as Catholic demonstrates how nuanced and diverse this voting group has become in recent years. Modern Catholics comprise several subgroups representing generational, cultural, and ethnic differences that all vote differently but generally place a high value on their faith and religion when making political decisions.

Some 68 percent of all Catholics said their faith is important when considering their vote for Congress this year, compared to 32 percent who said it isn’t important. And an overwhelming 82 percent said a candidate’s support for religious freedom would make them more likely to vote for them, compared to just 10 percent who said it would make them less likely to vote for those politicians.

Overall, Catholic voters today are a far cry from the Democratic voting bloc that helped propel John F. Kennedy, the first and only Roman Catholic to serve as president, to the White House in 1960. In fact, the political ideology of the 1,757 surveyed skews more conservative or lean conservative than liberal or lean liberal by a margin of 40 percent to 34 percent. More voters identified as Democrat (42 percent) than Republican (38 percent), but 20 percent considered themselves independent or unaffiliated with either party.

Despite Catholic voters’ split political affiliations, the group remains crucial because there are so many of them. More than one in five voters identifies as Catholic, although they are difficult to typecast, according to John Della Volpe, director of the RealClear survey.

This may explain the lack of clear advantage for either party ahead of the midterms, but it doesn’t mean Catholics as a whole don’t have strong feelings about political issues right now.

The RealClear Opinion/EWTN poll found that President Biden has lost significant ground with Catholics since his election. In 2020, Biden carried the Catholic vote by five percentage points, with 52 percent of all Catholic voters casting their ballots for Biden and 47 percent for Trump, according to Edison exit poll data.

Now just 47 percent of Catholics approve of Biden’s job performance, while 53 percent disapprove, the survey found. Still, Biden’s approval rating among all Catholics remains nearly ten points higher than among all voters. The most recent RCP average of voter opinion polls pegs the president’s approval at a new low of 37.8 percent, with 56.6 percent disapproving.

Trump’s favorability rating among all Catholic voters was equally split: 49 percent of voters surveyed held a favorable view of the 45th president while 49 percent held an unfavorable one.

The poll also shows a big difference in how white and non-white Catholic voters view Biden. Despite reports that Republicans are making inroads with Latino voters, Biden’s approval rating among Latino Catholics stands at an impressive 59 percent. Among white Catholics, it’s a dismal 36 percent.

On the pressing issue of inflation, Catholic voters as a whole have little hope in Biden’s ability to relieve the economic pain. A whopping 89 percent said their finances had been significantly impacted or affected to some degree by the rising cost of gas and other goods, and 57 percent said they didn’t have much or any confidence that the Biden administration can significantly reduce inflation in the next year.

Still, Catholic voters are generally split on what’s most to blame – 36 percent say Biden and his policies, and 33 percent say the war in Ukraine and the global slowdown, while 25 percent said both were equally at fault.

On the fierce national policy debate on abortion, the survey produced some seemingly conflicting results. A plurality of all Catholics favored upholding Roe v. Wade by a 47 percent-42 percent margin, with little or no gender gap. Both men and women were narrowly opposed to overturning the landmark 1973 ruling.

Unsurprisingly, party affiliation was the most influential factor in whether respondents favored or opposed overturning the landmark abortion case. Republicans strongly supported reversing the decision by a margin of 52 percent-36 percent, while Democrats strongly opposed doing so by a 58 percent-33 percent margin.

But a high percentage of Catholics, 65 percent-23 percent, also acknowledged that abortion conflicts with Catholic teaching. By a 68 percent-23 percent margin, these voters also backed laws requiring parental consent for minors before undergoing an abortion.

The survey also showed that the vast majority of Catholics oppose unfettered access to abortion. In the last two years, though, slightly more of these voters have shifted away from the church’s strict opposition to abortion.

Just 18 percent of those surveyed said abortion should be available to a woman at any point during her pregnancy, up from 15 percent in 2020, while 32 percent said abortion should be allowed only in cases of rape, incest, or to save the life of the woman, and 9 percent said it should never be permitted under any circumstance, down from 11 percent in 2020.

Because of the Catholic church’s strong teachings on the subject, Catholic voters appear educated on abortion issues. A solid majority (62 percent) are aware that a decision to overturn Roe v. Wade would result in federal and state legislators determining how to regulate abortion, as opposed to 24 percent who believe abortion immediately became illegal nationwide.

By a nearly two-to-one margin, 59 percent-30 percent, Catholic voters support the Trump-era “conscience rule” that allows health care workers to opt out of procedures (such as abortion, sex-reassignment therapy, physician-assisted suicide) that conflict with their religious or moral beliefs.

Regarding political clashes over gender identity, an overwhelming majority of Catholics (63 percent-25 percent) believe that gender was created by God rather than determined by individuals. On the divisive issue of allowing transgender people to participate in girls’ sports teams, 56 percent believe that allowing such competition conflicts with Catholic teaching.

Most Catholic voters who are parents of school-aged children – 57 percent – said they had not considered alternate education for their children because of gender-identity-related school policies, but 33 percent have looked for other options, citing too much emphasis on gender identity in their children’s schools.