Bring on the conference matchups. The start of October means the days of teams playing their in-state little cousins are (mostly) over. Conference games mean the fans get the best matchups.

What a matchup we got Saturday between Auburn and Florida. For all of the turnovers, we got two excellent teams in a real slobber knocker of a football game. Florida’s victory proves something that we should have recognized all along: Dan Mullen is one of the best football coaches in the country.

Mullen’s offensive line at Florida is not anywhere near as good as the defensive line at Auburn. To make up for this deficiency, Mullen managed to line his team up so that on multiple occasions his lightning-quick slot receiver was lined up against either an Auburn linebacker or a safety. The result was two huge touchdowns that made the difference. Mullen’s game plan was smart and relied on the defense, the Gators’ best attribute. The plan was to swarm the Auburn running game and then confuse true freshman quarterback Bo Nix. It worked like a charm. This is the second-best win on the season so far, right behind LSU’s win at Texas. This is reflected accordingly in the rankings below. As a reward, the Gators will go to Baton Rouge to face LSU. The winner of the game will be number one next week.

I am fascinated to see what happens next with UCF fans. The team lost another heartbreaker in Cincinnati on Friday night, marking the first two-loss season since 2016. UCF’s chance to make the Cotton Bowl, or even the AAC Championship, game is pretty much gone. Here is your chance to prove you are not a bunch of bandwagoners, Knights fans. The team gets a week off to lick its wounds and correct any mistakes before facing ECU at home. There are questions about whether the game will be a sellout. Before the Knights got on their big run and even during the start of that winning streak, there were a lot of empty seats at the Bounce House. This is the time Knights fan can show their team they are still with them, something UCF need to do as it looks to be counted as one of the big boys of college football.

I wonder what to make of several teams that are showing drastically different performances from week to week. Is Michigan any good? Their defense was magnificent in a home beat down of previously unbeaten Iowa. That’s the same run defense that was dominated by Wisconsin. How about Minnesota? They trailed three Group of 5 schools in the second half before comeback wins but have thumped two conference opponents to get to 5-0. Nebraska and Rutgers are next so 7-0 is certainly possible. Can Baylor get a shout out? They went to Kansas State and knocked off the vastly improved Wildcats who are making great strides under new coach Chris Klieman. After refusing to rank them early for their terrible non-conference schedule, I am now including Baylor. Of course, the real tests are coming.

Top 25 for the Week Beginning October 6

2. Florida (6-0) Earned this position despite doubts about their weaker schedule to start the season.

4. Georgia (5-0) Marquis win is Notre Dame at home. Do I have this wrong? Is that better than beating Auburn or Michigan?

6. Clemson (5-0) Tigers need teams ahead of them to lose or for Texas A&M to upset one or two big teams.

7. Alabama (5-0) At Texas A&M this week gives them a better yardstick to compare them to Clemson.

8. Oklahoma (5-0) Move ahead a spot because Air Force lost to Army.

9. Boise State (5-0) Air Force loss denigrates their win. Now standing so high by winning at FSU. How good is that?

12. Baylor (5-0) I don’t think they’ll stay long but that was an impressive win in Manhattan this past weekend.

16. Minnesota (5-0) A challenge in the Big 10 West for Wisconsin–or just a team with an easy schedule?

20. Michigan (4-1) Offense is still not any good but the Wolverines picked up a badly needed win against Iowa.

23. Virginia (4-1) Can they carry the flag for a terrible ACC Coastal? 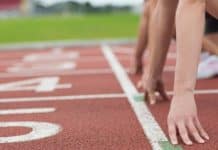 Florida Congressmen Call on Olympic, Paralympic Committees to Cut Down on ‘Anti-American Rhetoric’