There is an old saying that the squeaky wheel gets the grease. Is there a similar expression about the little dog that won’t stop yapping? The University of Central Florida (UCF) will host ESPN’s premier college football show this week and either expression could apply.

Make no mistake about it. The college football world would have never focused on little ole UCF were it not for the yappiest little dog of all, the squeaky wheel himself, UCF Athletic Director Danny White. It was White that proclaimed UCF as national champion last year after the Knights beat Auburn in the Peach Bowl. The UCF faithful ate it up.

This year White engaged ESPN’s Gameday crew on Twitter calling them out for the disrespect he feels like UCF is getting. 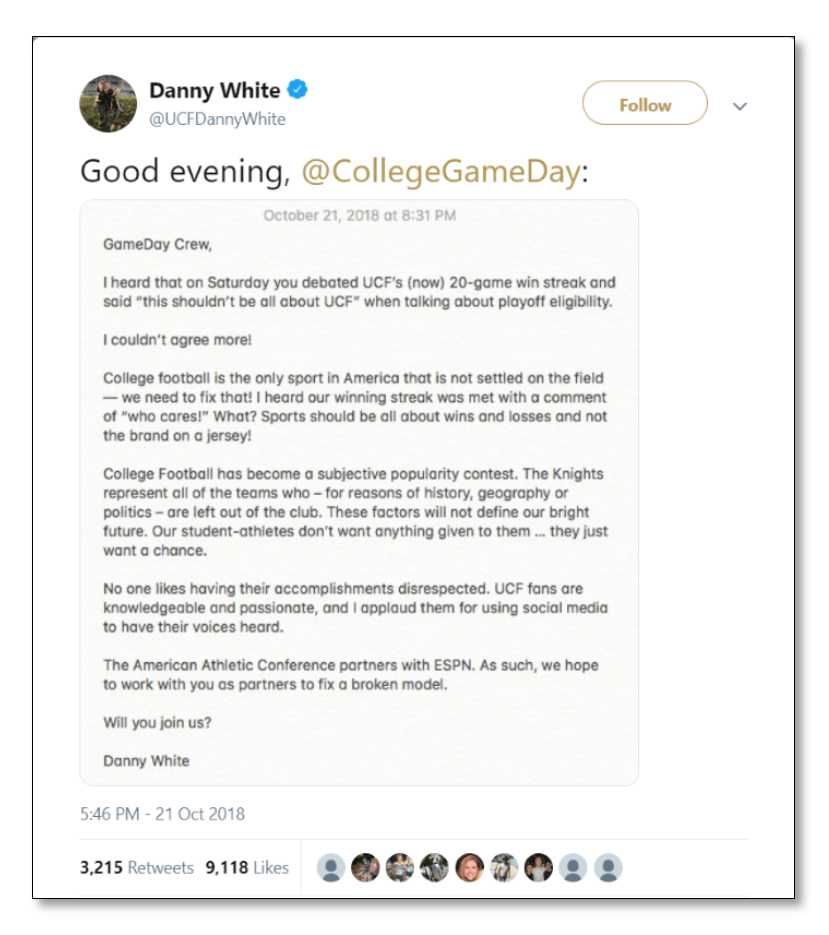 Now Gameday is coming to UCF as the Knights get ready to take on Cincinnati in a game where the stakes could not be higher. This could be a major win for the program both on and off the field. UCF will get a three hour promotional video showcasing their campus and program. The campus is a perfect fit for this type of event because UCF has what’s called “the Memory Mall,” a giant open space on campus where 5,000 fans will easily fit, making a great venue for the show. It is also an opportunity to show the Gameday bunch that UCF’s facilities are better than many Power 5 schools. Finally, ESPN is sending it’s top crew–Chris Fowler and Kirk Herbstreit–to call the national telecast at 8pm on ABC. UCF could not ask for a better opportunity. Now the Knights have to take advantage of it.

Here is my Top 25 for the week beginning November 11th.