The bill will “require the federal government to review top Russian oil companies, including Rosneft, Surgutneftegas, Lukoil, Gazprom and others, every 90 days to determine if they should added or removed from the United States’ Entity List, and would require an act of Congress to remove any such company from the list. “

Scott’s office defined the Entity List as “a tool used by the federal government to restrict the export, re-export, and transfer of items to individuals, organizations and companies reasonably believed to be involved, or to pose a significant risk of becoming involved in activities contrary to the national security or foreign policy interests of the United States.”

After bringing the bill out on Thursday, Scott showcased it on Friday.

“We can all agree that the United States should not be bolstering Putin’s disgusting, tyrannical regime and we must cut off all dependence on Russian oil to stop funneling money to his war on Ukraine that’s killing more children, families and innocent civilians every day. We must make completely clear to Russian oil companies that the U.S. stands for freedom; and they will be completely black listed and stay that way until it is proven to Congress they deserve to do business in our freedom-loving nation. That’s exactly what my Stop Top Oil Producers and Protect Ukraine from Tyrannical Invasions Now (STOP PUTIN) Act does. We need to revitalize American energy production now. We should not be turning to murderous regimes like Venezuela, Iran and Communist China to fill Russia’s place,” Scott said.

The bill was sent to the U.S. Senate Banking, Housing and Urban Affairs Committee. So far, Scott has not reeled in any co-sponsors. There is no companion measure over in the U.S. House.

Marco Rubio: ‘The Planet is Threatened by the Rise of a Totalitarian Bloc 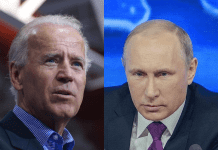