A proposal backed by a congressman from the Sunshine State to increase federal investments in marine energy is gaining traction on Capitol Hill.

“The power of waves, tides, and currents from our ocean can be captured and converted into clean, renewable energy to power our homes, buildings, and communities,” said Bonamici when she introduced the bill. “Marine energy is one of the last untapped renewable energy sources. It can play an important part in addressing the climate crisis, but it requires stronger federal investments. Our bipartisan Water Power Research and Development Act will help accelerate innovative research and development, like the work that is being done at Oregon State University and the Pacific Marine Energy Center, to help us transition to a 100 percent clean energy economy.”

“I have long supported harnessing Alaska’s vast hydropower capabilities, and was proud to support projects such as the Terror Lake Hydroelectric Plant and the Swan Lake Hydroelectric Project,” said Young. “Hydropower is an important energy resource, and we should be doing all that we can to empower communities in Alaska and across the country to pursue opportunities in hydropower. This is a very good bill, and I want to thank my good friend Congresswoman Suzanne Bonamici for her leadership on this crucial effort.”

“In Florida, we’re surrounded by a powerful, renewable energy source that’s waiting to be harnessed,” said Deutch. “Marine and hydrokinetic energy should be part of our national strategy to diversify our energy sources and include more renewables. This legislation would encourage and support the research, development, and implementation of the science and technology to ultimately connect marine and hydrokinetic energy to our electric grid. I’m proud of the innovative team at Florida Atlantic University’s Southeast National Marine Renewable Energy Center working to improve our understanding of the potential of recovering power generated by waves, currents, and tides.”

This week, the U.S. House Science, Space, and Technology Committee passed the proposal which is now headed to the House floor.

“With oceans covering more than 70 percent of the planet’s surface – including all around Florida – we should harness this powerful, renewable energy resource. According to estimates, there is enough kinetic energy in waves and tides along U.S. coastlines to meet a significant portion of our nation’s power needs,” Deutch noted on Thursday.

“Importantly, the bill authorizes funding for existing and new National Marine Energy Centers, including Florida Atlantic University’s Southeast National Marine Renewable Energy Center. I’m proud of the innovative team at FAU working to improve our understanding of the potential of recovering power generated by waves, currents, and tides,” he added.

The legislation does not have a companion bill over in the U.S. Senate.

Attorney Jim Bruden is the Republican candidate challenging Deutch in November. This South Florida seat is considered secure for the Democrats. 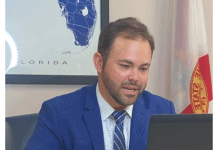