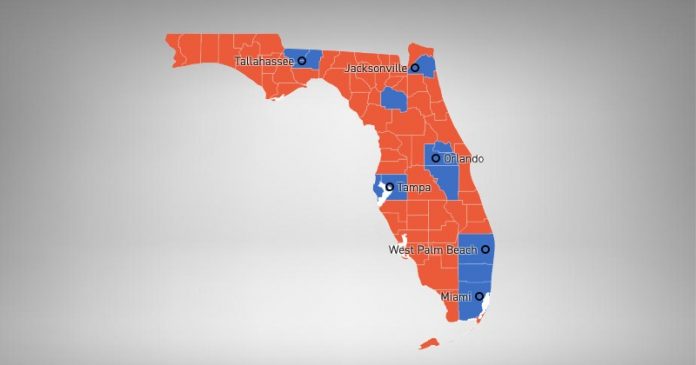 In recent years, many conservative media stars have moved to Florida. Republican governor Ron DeSantis’ leadership on COVID-19 and other issues has won admirers and helped make him a presidential contender. Donald Trump won Florida in 2016 and 2020, and he has lived in the state since leaving the White House. The perception has grown of Florida as a red state akin to Alabama or Tennessee. And yet, Barack Obama carried Florida twice, and Trump’s winning margins were thin. How red is Florida?

Electorally, many people still remember Florida for the 2000 election, where it put George W. Bush over the top as president by a margin of just 537 votes. That same election, Democratic Senator Bill Nelson won an open Senate seat by about five points. In 2002, then Governor Jeb Bush won reelection by a large margin, and Republicans took control of several statewide offices for the first time. Republicans’ political fortunes in the state continued to surge in 2004, when they won an open Senate seat held by a long-time Democrat, and George W. Bush carried the state by five points in his reelection bid. At this point, Florida looked pretty red.

But in 2006, Democrats won the statewide office of Chief Financial Officer, and Nelson, who many expected to face a close reelection campaign, prevailed easily. Despite these Democratic successes, Republicans did hold onto the governorship, with then-Republican attorney general Charlie Crist winning by seven points. Democrats took heart in 2008, however, when Barack Obama won the state by about three points on his way to the presidency.

In 2010, Republicans made a comeback, winning all statewide offices up for election, including Marco Rubio for Senate and Rick Scott for governor. Republican presidential nominee Mitt Romney saw Florida as a must-win in his 2012 campaign, but he lost the state narrowly to Obama. And that same year, Congressman Connie Mack IV, son of one of the most successful Republican politicians in Florida history, lost his Senate bid to Nelson by 13 points. But the seesawing between the parties continued in 2014, when Republicans rebounded again, winning all statewide offices again.

In 2016, Republicans continued to rack up victories. Trump won the state narrowly, but Rubio won reelection by a healthy margin, this time with over 50 percent of the vote. Some might see 2018 as a turning point for Republicans. In an otherwise strong Democratic year, Scott beat Nelson, winning his Senate seat, and Ron DeSantis won the governorship. Trump’s 2020 victory in Florida was modest but bigger than most polls projected. It was the best showing in Florida for a Republican in four presidential election cycles.

Florida has a long history of swinging back and forth between the parties. In the past, however, Florida generally went the way of the nation. That changed in 2018 and 2020, when Republicans prevailed in Florida despite losing nationally. Trump’s winning the state twice puts Florida to the right of the national electorate, too, since Trump lost the popular vote twice. A thorough analysis by Five Thirty Eight based on presidential, gubernatorial, and congressional voting has found that Florida is 7.6 percent more conservative than the U.S.

Two other swing states – Iowa and Ohio – are even further to the right of Florida, according to Five Thirty Eight. And they have moved in that direction rapidly. Obama won them both by larger margins than he won in Florida – but then, in 2016 and 2020, Trump did the same. For Democrats at this point, Florida is probably a more winnable target than Ohio and Iowa, where state policies are more aggressively conservative. Abortion is illegal in Ohio, for example, and it could soon be illegal after six weeks in Iowa. In Florida, abortion is illegal after 15 weeks. If Florida were as conservative as Ohio and Iowa, DeSantis would likely push for a more aggressive ban.

It can take several cycles to identify a state’s political direction. Obama won Virginia in 2008, but then Republicans won big there in 2009, and many felt that the state was going purple, if not red. Yet, Democrats won Virginia in 2012 and 2016, and they won it by double digits in 2020. Conversely, Obama won Indiana in 2008, by a larger margin than he won even in North Carolina, yet the state became reliably red again in 2012.

In 2022, Republicans will likely win all statewide offices in Florida. Democrats are fielding legitimate candidates against DeSantis and Rubio, but between the national environment for Democrats, Florida’s recent conservative lean, and DeSantis’s fundraising advantage, there is a good chance that Rubio and DeSantis will win by double digits.

Also working in Republicans’ favor is that for the first time, registered Republicans outnumber registered Democrats. Additionally, Republicans made major inroads with Cuban voters in 2020. Given that just about all Hispanic communities are becoming more conservative, Republicans can capitalize on their previous gains.

In 2020, Democrats did make gains in the Florida suburbs and the panhandle. This ties in with where Democrats performed well nationally. Some of these suburbs were once Republican strongholds, and 2020 marked the first time that they had voted Democratic in decades. If Democrats can continue to win votes in these suburbs and take back some lost ground among rural and minority voters, they have a path to victory.

Democrats won the presidency and the Senate in 2020 without winning Florida. Still, if they want to hold these gains, let alone build on them, they need to expand the map, and Florida is an obvious target. Even if Democrats fail to take back the state in 2024, Florida still has a way to go before it can be considered a Republican stronghold.

Todd Carney is a lawyer and frequent contributor to RealClearPolitics. He earned his juris doctorate from Harvard Law School. The views in this piece are his alone and do not reflect the views of his employer. This piece originally ran at RealClearFlorida.