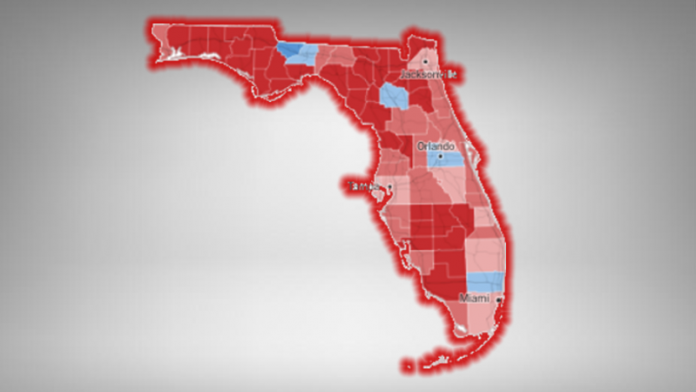 In 2020, President Donald Trump won Florida by a little over three points. It was the best showing for a Republican presidential candidate in Florida in 16 years. Trump outperformed the polls by four points and did better in Miami-Dade County with Hispanics than anyone expected. The 2020 results and Republican governor Ron DeSantis’s strong performance in office led many to see Florida as a budding red state, though it also seemed that this might be an overestimation. Now, however, in the aftermath of the 2022 midterms, Florida is clearly on its way to being a red state.

After 2020, many were excited about Florida as a conservative refuge. Florida stayed open while the rest of the nation shut down during Covid-19. Trump moved to Florida after leaving the White House, and many conservative influencers moved there as well. Still, in 2004, President George W. Bush had won Florida by five points. In the following midterm, Republicans lost the race for Senate in Florida in a landslide. Then in 2008, Republican presidential nominee John McCain lost Florida by about three points. In the decade to follow, Republicans lost another presidential election, lost a Senate race in a landslide, and faced defeat in several competitive congressional races. Even in 2018, Republicans lost a statewide office that they had held, and barely kept the governorship.

Early this year, DeSantis was favored for reelection, but many thought he would have solid competition, given that his two potential opponents were Florida agriculture commissioner Nikki Fried and former governor Charlie Crist, both of whom had won statewide races. Additionally, Republican senator Marco Rubio was facing a well-funded challenge from Democratic congresswoman Val Demings. Democrats were excited about Demings because she had impressive credentials as a former police chief, and she was on President Joe Biden’s shortlist for vice president. Polls showed a competitive race as late as Labor Day. And even though Republicans received a boon from favorable redistricting, many expected Congresswoman María Elvira Salazar to face a competitive reelection.

Looking beyond these three races, Florida now has 20 Republican House members and only eight Democrats. Republicans did not seriously contest the eight seats, but the Republican candidates outperformed the 2020 presidential results, and some of the seats might be winnable in the next few cycles.

Republicans also won supermajorities in both houses of the state legislature.

If Republicans can hold these numbers or even build on them, Florida will not just be a conservative haven – it will serve as a core of the GOP’s electoral base. Having the third-largest state solidly in the Republican column will greatly improve the party’s chances to win control of Congress and the White House.

While Republicans had some electoral victories in the 2010s, this current electoral trend emerged only in 2020 and 2022. If Republicans can keep it going through 2024 and 2026, Florida will become out of reach for the Democrats.