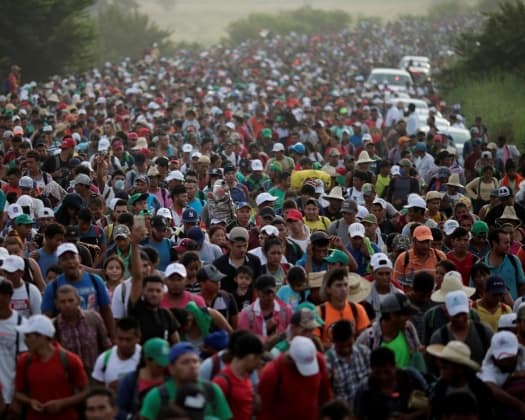 With the Trump administration planning to transfer illegals captured crossing the border from Mexico to two South Florida counties, Gov. Ron DeSantis and members of the Sunshine State’s congressional delegation reacted to the news.

“An unprecedented flow of unlawful immigrants and asylum seekers is overwhelming our Customs and Border Protection workforce along our nation’s southern border. Palm Beach County (FL) Sheriff Ric Bradshaw informs me that the Department of Homeland Security intends to transport approximately 500 migrants per month from El Paso, Texas to both Broward and Palm Beach Counties for release pending an asylum hearing,” Rubio wrote.

“Please respond to the following questions prior to authorizing or scheduling any such movements,” Rubio added. “Does the Department intend to transport migrants currently in custody at the southern border to states that do not share a land border with Mexico? If so, why?

If so, does the Department intend to begin transporting migrants to communities in Florida and when? If so, which counties/cities/towns? How were these locations chosen? How many migrants will be transported to Florida counties/cities/towns, and for how long does the Department plan to continue this? Of the migrant population that will be transported to Florida, which countries will be represented? Has the Department engaged with state and local government officials, as well as local organizations, to plan for those communities to receive such an influx of individuals? If so, have the entities asked for additional resources to accommodate the migrants?

“It is clear the current situation is untenable and the Department is faced with difficult choices given the lack of resources appropriated to secure our nation’s southern border,” Rubio concluded. “Thank you for your immediate attention to this matter.”

“Immigrants play a valuable role in American society and folks seeking refuge should be treated with dignity. By threatening to move migrants from the border to Palm Beach County, the Trump administration is using human beings as political pawns. Our office is seeking more information,” said U.S. Rep. Lois Frankel, D-Fla., on Thursday night.

“The Trump administration has once again decided to use the weakest and most vulnerable as political pawns in its morally bankrupt immigration policies,” said U.S. Rep. Alcee Hastings, D-Fla. “Without any prior notice to my office or my House colleagues representing Broward or Palm Beach Counties, the administration has set in motion plans to send hundreds of migrants to South Florida every week. It is imperative that the Trump administration works with Congress and our local leaders to ensure plans are in place to shelter, feed, and protect these families. Putting hundreds of men, women, and children on the streets is not a plan – it is a calculated and cruel disaster waiting to happen.”

Hastings wasn’t the only elected official in Florida surprised by the news.

Despite being an ally of the White House who embraced President Donald Trump’s stances on immigration, DeSantis’ office insisted that the governor was caught off guard by the announcement and maintained the Sunshine State was not ready for this influx of migrants.