Two Democrats in the Florida delegation–U.S. Reps. Val Demings and Ted Deutch–are returning to the leadership of the Gun Violence Prevention Task Force.

Demings will once again be one of more than 10 vice-chairs of the task force while Deutch will return as the chief whip under U.S. Rep. Mike Thompson, D-Calif., the chairman of the group

“Just three years ago, in the wake of the devastating school shooting in Parkland, students started a movement to change to our gun laws so that they and their peers could be safe in their communities,” said Deutch. “Today, with a gun safety majority in both chambers of Congress and a president committed to confronting the gun violence epidemic, I’m ready to work with my colleagues on the Task Force to finally repair America’s gun laws. The vast majority of Americans want stronger gun laws and safer communities; we must hear their calls and take meaningful action.”

“As we begin this year with a historic opportunity to continue our action to help prevent gun violence, I am proud to announce our Gun Violence Prevention Task Force leadership for the 117th Congress. This diverse groups bring perspectives from across our nation and a diligence and passion for this issue that I know will help us accomplish great things,” said Thompson. “I am deeply honored to again serve as chairman of this Task Force and to be working with so many colleagues who deeply understand the tragedy of gun violence and bring a strong commitment to taking action. Know we will work to pass legislation and get it signed into law to help prevent gun violence across our nation.”

“Task Force leadership is drawn from members with diverse backgrounds, including former prosecutors and members of law enforcement, gun violence survivors, veterans, hunters and teachers. These leaders hail from rural and urban districts in states across the nation as well as districts that have experienced devastating gun-related tragedies,” Deutch’s office noted. 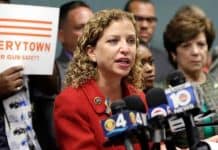