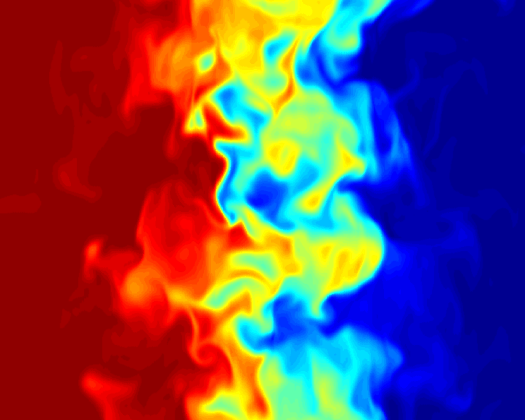 Researchers at University of Central Florida (UCF) believe they have made a major technology breakthrough which, they hope, will eventually allow cross country travel in as little as 30 minutes.

The breakthrough is called “turbulent mixing.” Dr. Kareem Ahmed, associate professor with the UCF’s Department of Mechanical and Aerospace Engineering, was able to take a regular flame like one from a campsite or a lighter and turn it into a “hypersonic flame” which travels at five times the speed of sound.

Because it is the beginning of testing, Ahmed and team believe they can reach speeds of Mach 8 eventually.

Providing combustion flames at hypersonic speed could allow people to go from New York City to Los Angeles in just half an hour. Jonathan Sosa co-authored a research paper on the matter and partnered with Dr. Ahmed in the lab to produce these groundbreaking results.=

“These laboratory scale experiments are capable of providing crucial information on the flame behavior for the advancement and design of hypersonic vehicles as well as providing new insight into how these fast flames propagate to deter flame propagation leading to explosion,” Sosa noted.

Ahmed said taking a simple power source, harnessing it and accelerating that power is a game changer.

“This new discovery is key for using these high-Mach fast flames for hypersonic air-breathing scramjet propulsion engines, a specific type of engine that can propel an aircraft to five times the speed of sound and above,” Ahmed said. “And it will aid in fighting intense fires and explosions.”

There is a lot of work to do in the effort to make this form of high-speed travel possible. Researchers at UCF and NASA will now try and figure out what type of vehicle to incorporate this technology in. Because the speed would be five times the speed of sound, a plane or craft using this technology would have to be modified to handle those types of speeds. The most likely solution would be ceramic tiles similar to what was used on the space shuttle to handle the incredible heat that would be generated by traveling that fast.

Another concern is if humans are able to handle those speeds including factoring in the G Forces traveling at that speed would likely generate. Researchers will have to determine if people would need a space suit to travel using that new technology. If not, researchers might have to determine if some other type of suit would be required.

Regardless, UCF and its team are hoping to test a vehicle using this technology in about two years.