Buchanan and U.S. Rep. Buddy Carter, R-Ga., sent a letter signed by almost 50 other Republicans to Biden on the matter at the end of last week.

“Intellectual property rights encourage innovation and help boost the economy,” said Buchanan on Monday. “The Biden administration’s misguided proposal to waive IP protections will discourage innovation and make it more difficult to achieve the next life-saving medical breakthrough. It will also serve as a massive giveaway to countries like China, Russia and India that have been stealing American innovators’ intellectual property for years.”

“The reported agreement allows any government or company to copy state-of-the-art American technology, inevitably ensuring that it falls into the hands of Russia, China and other adversaries that threaten the United States and our allies,” the Republicans wrote.

Buchanan also threw his support behind U.S. Rep. Adrian Smith’s, R-Neb., “Protecting American Innovation Act” which will “ensure that Congress has final approval over any such action.”

Smith introduced the proposal last week with Buchanan as one of the ten co-sponsors. The bill, noted Buchanan’s office, will “prohibit the administration from unilaterally dismantling IP protections for U.S. companies and handing American innovation over to our foreign adversaries” and “requires the USTR to consult with Congress when negotiating U.S. trade agreements, including TRIPS waivers” and “also requires the Executive Branch to report to Congress on why a TRIPS waiver is necessary.”

Smith’s bill was sent to the U.S. House Ways and Means and the Rules Committees.

Buchanan is a contender to take over as chairman of the Ways and Means Committee if the GOP flips the House in November. 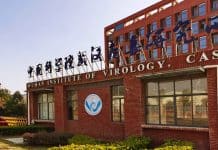