With U.S. Rep. Kevin Brady, R-Texas, not running again in 2022, U.S. Rep. Vern Buchanan, R-Fla., said he wants to lead the U.S. House Ways and Means Committee, one of the most powerful bodies in Congress.

Brady, who currently leads Republicans on the committee, announced this week that he will not run next year.

On Thursday, Buchanan said he wants to lead the committee.

“The announcement by Rep. Kevin Brady that he will not seek re-election is a huge loss to our party,” said Buchanan.  “Kevin has been nothing short of a superstar over the past five years as Republican leader of the Ways and Means Committee.  I worked side by side with Kevin and saw his critical leadership in passing the historic Tax Cuts and Jobs Act of 2017 and the landmark trade deal with Canada and Mexico.  It is my honor to serve as the Republican leader of the Trade Subcommittee and as past chairman of the Tax Subcommittee while these issues were under consideration.  At the appropriate time, it would be an honor to be considered for the chairmanship of the Ways and Means Committee when we win back the House in 2022.” 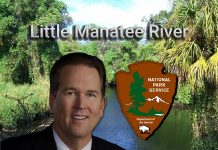 Vern Buchanan Goes to Bat for NRCC, Michigan Republicans as Race for Ways and Means Chairmanship Heats Up