While he might be new to the Tallahassee campus–which is connected with Tallahassee Community College (TCC)–Riggs is no stranger to Flagler in general, having served as an associate professor of history and associate dean of the School of Humanities and Sciences of the college’s main campus in St. Augustine.

“As dean at Tallahassee, he will be primarily responsible for integrating the two campuses, campus operations, examining and strengthening existing programs and building new ones to satisfy the needs of the community,” Flagler noted last week.

Flagler College President Joseph Joyner praised Riggs last week as he takes over in Tallahassee. Offering six degrees, Flagler has had a Tallahassee presence for almost two decades and has produced more than 2,700 graduates.

“We are sorry that he will be leaving the St. Augustine campus, but we believe that he is the right choice to lead Tallahassee and bring the two campuses closer together,” Joyner said.

“I’m really excited to help serve the needs of the Tallahassee community in my new role there. Not many seem to have heard of our campus in Tallahassee so I’m looking forward to raising the awareness of the great education we offer on Tallahassee’s campus,” said Riggs.

Riggs holds a Ph.D. and M.A. in Modern European History from Marquette University and a B.A. in History from Grove City College. He focuses on modern British history, specializing in that country’s role in World War One. 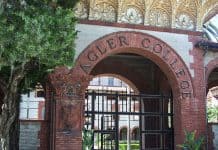