With the Labor Day weekend, the traditional end of summer, now over, the Sunshine State turns its attention to the general elections in November.

Florida is in the odd spot of being overshadowed by other swing states this election cycle, including its neighbor to the north. While Florida might not offer the dramatic contests that Georgia and Pennsylvania are seeing this year, some contests are drawing national attention.

With Gov. Ron DeSantis generating buzz as a likely presidential hopeful in 2024, all eyes are on Florida’s gubernatorial race. While DeSantis starts off as the early favorite over former Gov. Charlie Crist, who won the Democratic primary two weeks ago, races in Florida tend to get tight in the final days of the campaign. DeSantis’ team wants an impressive win in November, hoping to run up a larger margin than Donald Trump did against Joe Biden in Florida back in 2020.

Now running for a third term, U.S. Sen. Marco Rubio, R-Fla., has a serious challenger in U.S. Rep. Val Demings, D-Fla., Both sides are on the attack, while Democrats hope that independents and even some Republicans will be attracted to Demings thanks to her 27 years as a police officer. Rubio starts off as the favorite, and the stakes could not be higher. With several high-profile GOP Senate candidates facing problems, it’s impossible to imagine the Republicans flipping the Senate if Rubio loses to Demings.

While he is not on the ballot this year, the stakes are also high for U.S. Sen. Rick Scott, R-Fla., the chairman of the National Republican Senate Committee (NRSC). Scott is drawing criticism from some Republicans for some of the high-profile Senate candidates that are struggling so far in this campaign. Already at odds with U.S. Senate Minority Leader Mitch McConnell, R-Ky., Scott is now drawing fire from other Republicans, including, as a New Republic article noted last week, some who say he is more interested in advancing his own presidential prospects than helping the GOP win the Senate. If the Republicans do not win the Senate in November, look for Scott to get a great deal of the blame.

If the Republicans are doubtful about taking the Senate, the GOP remains bullish on controlling the U.S. House in November. Thanks in part to redistricting, Republicans should gain seats in Florida, including picking up the seats Crist vacated and the one currently held by retiring U.S. Rep. Stephanie Murphy, D-Fla. The GOP should also win a new seat in Northeast Florida as state Sen. Aaron Bean starts off with the edge of businesswoman LJ Holloway. Over in the Big Bend, U.S. Rep. Neal Dunn, R-Fla., looks like the favorite over U.S. Rep. Al Lawson, D-Fla., in a rare match pitting two incumbents against each other. Former state Sec. of State Laurel Lee, who won the Republican primary last month, starts with the edge over former news anchor Alan Cohn, the Democratic nominee. In the meantime, activist Maxwell Frost, an upset winner in last month’s primary, and Broward County Commissioner Jared Moskowitz, best known for leading the Florida Division of Emergency Management, should keep open seats in the Democratic column. While national Democrats have some hope that state Sen. Annette Taddeo can defeat U.S. Rep. Maria Elvira Salazar, R-Fla., in November, the incumbent starts that race as a solid favorite. In the meantime, the other members of the Florida delegation are strong favorites to keep their seats in November, while U.S. Rep. John Rutherford, R-Fla., is already assured another two years in Congress.

The Republican nominees for state Cabinet offices also begin the general election season as the favorites. Florida Attorney General Ashley Moody starts with the edge over former Orange County State Attorney Aramis Ayala, who won the Democratic primary last month. State CFO Jimmy Patronis faces a respectable challenger in former state Rep. Adam Hattersley, but the incumbent should keep this seat in the GOP’s hands. After winning the Republican primary last month, state Senate President Wilton Simpson should be able to flip this seat from the Democrats and starts as a strong favorite over accountant Naomi Esther Blemur who won the Democratic nomination. Keep an eye on the margin of victory of all three of these Republicans in November as the battle to replace DeSantis, whether through term limits or a successful presidential election, starts on Election Day. 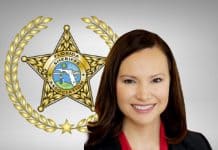